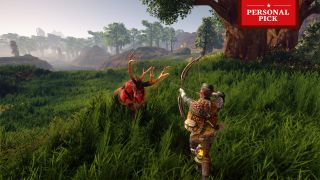 Outward does things differently than most games, beginning with what happens when you lose a fight. In the fantasy RPG from Nine Dots Studio, you don't die when your hit points drop to zero (unless you're using the permadeath mode added back in October). Instead, you fall unconscious and wake up somewhere else. A mysterious benefactor may have dragged you to a warm campfire, a passing traveler may have carried you to a town, or you might wake up in a bandit's prison, dazed and battered, and have to stealthily gather your gear and escape.

These outcomes result in losing some time, consuming some precious supplies to return yourself to good health, and having to travel—sometimes a considerable distance—to get back to the fight you lost just to try again. Which in a way, makes falling unconscious much more punishing than simply dying and reloading a saved game.

This is especially unusual, and surprisingly effective, considering the deep survival systems in Outward. It doesn't seem like a survival game would work if you can't actually die. But since you can't fast-travel, and since maintaining your health and stamina is a real struggle in the harsh world, even minor enemy encounters feel fraught with real peril, and every small victory feels like a major triumph.

In Outward you're a sort of nobody, a common citizen living in a small city by the sea. Your adventure begins with you getting kicked out of your home, and the first quest is to quickly earn enough money to buy it back—a quest I failed, badly, which is interesting because how many quests can you even fail in a singleplayer RPG? You typically just keep trying until you win, reloading a save after save until you've completed the task. But you can't reload your saves in Outward (unless you mess around in the game's files), and this first quest was on a timer. I was defeated in combat, dragged halfway across the map, and couldn't get back to town in time to save my house.

Depriving you of your home feels like an odd thing for a game to do right off the bat—I mean, it sucked, and now I had to come up with twice the amount of gold the original quest required. But a lesson was learned. This wasn't going to be easy. Forget crisscrossing the map at top speed, taking on hordes of enemies without a thought, and zipping back to town with my pockets stuffed with treasure. In Outward, you have to move at a measured pace. Each trip across the map begins with taking a few minutes to make sure I've got everything I need to survive: weather-appropriate clothing, enough food and healing items, and enough space in my backpack to carry a few pieces of loot back home. Each inventory slot in my little backpack, filled or empty, is important, and even a short trip can turn into a disaster.

And everything in Outward comes at a price. Even the act of practicing magic begins with a long, tough journey to the center of a mountain, and then requires you to sacrifice a portion of your physical health and stamina just to gain the ability to fling a weak fireball—a simple spell most RPGs would just stuff in your bag of tricks at the beginning of the game. It's a lot of work to get your character to the point most RPGs begin at.

But in Outward magic is a real system, not just a mana meter to keep your eye on while you're flinging lightning bolts around. My weak fireball can become a powerful one if I cast it while I'm standing inside a magic circle, which I can cast as another spell provided I've got the physical components for it—and that takes the same sort of collecting and crafting as the rest of the survival system does. The effectiveness of spells often relies on precursor spells or tomes or performing certain actions. The spell combos are fun to learn and even more satisfying to use—and the cost of performing magic also means there's a decision to be made before each encounter. Is this enemy even worth using up the resources I need to cast spells? Or should I stick to swords and traps and save my magic for something tougher?

This adds a lot of weight and thought to what would otherwise be minor encounters, and ties into the themes of survival and hardship that flow through Outward from start to finish.

The world of Outward—really a handful of open world areas connected by gates—isn't the most fascinating fantasy realm I've ever visited. This isn't a big budget game, so you can't talk to the characters populating the world unless they're offering you quests. The world of Outward, at times, can feel a bit plain and static. But despite a few rough edges, it was still one of the most engrossing experiences I had this year.

It's a game where simply traveling from one city to another is a long and sometimes grueling journey that requires lots of forethought and planning, where simply acquiring a new weapon or purchasing a slightly bigger backpack seems like a momentous occasion. Best of all, you can play the whole game in online co-op with a friend—exceedingly rare for a fantasy RPG—and having someone to share your hardships, talk through each of your decisions, and celebrate your big little victories with makes it even better.