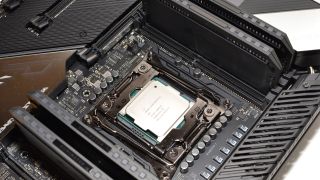 It looks as though Intel is planning to introduce a bunch of 10th generation desktop "Comet Lake" processors very soon, likely either at CES or perhaps sometime shortly after, if the latest leaks hold up.

The information comes from a pair of supposed presentation slides outlining nearly a dozen Comet Lake CPUs, including model names, clockspeeds, and a thermal velocity boost feature that apparently will push speeds up to 5.3GHz (depending on the model).

Informática Cero leaked the slides, and Videocardz followed suit with a couple of additional ones that it was asked to take down. It complied, but still shared the details from those additional slides.

We can't say for certain if the slides are accurate, and even if they are, specs could change between now and whenever Intel launches them. That said, they detail 11 Comet Lake processors, including a pair of 10-core/20-thread chips capable of boosting to 5GHz and beyond that could give the Core i9-9900K, the best CPU for gaming, a run for the money.

Here's a rundown of the SKUs:

It's not outlined when exactly the velocity boost clocks would come into play on these desktop chips, though if Intel follows the same script it uses for its mobile CPUs, it would be when temperatures drop below 50C.

What's also interesting here is the liberal use of Hyper Threading. All of the leaked Comet Lake CPUs show support for Hyper Threading, including the four Core i5 and three Core i3 models. This would add some value to the lower end parts.

From what we know about Comet Lake, these will be another round of processors built on Intel's 14nm node, albeit further refined. We're still waiting on Intel to make the jump to 10nm on the desktop.

In the meantime, it looks as though Intel is bolstering its 14nm lineup with more cores and faster clocks, as AMD puts the pressure on with its Zen 2 processors.