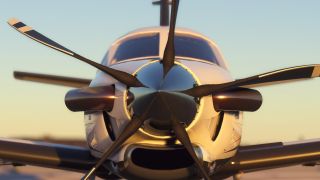 Microsoft Flight Simulator took everyone by surprise at E3 2019 with its sheer visual fidelity, and since then every new morsel Microsoft feeds us about its new sim blows our minds anew. The whole planet to explore, somehow powered by Bing’s satellite data. Weather systems and seasons. Those graphics. Here’s everything we know so far about Microsoft Flight Simulator, and how you can play it before its full release.

This isn’t as straightforward to answer as it seems, and that’s not just a flowery way of saying ‘not a clue’. Currently the final version is slated for a 2020 release, which is pretty broad. Some people are playing a very early version of it right now, though—cast your eyes below.

Despite that vague 2020 release, alpha testing has been going on since October 2019 and new versions of that alpha, which add new planned features for the final release, are rolled out on a monthly basis.

The game’s development roadmap isn’t set in stone (when are they ever?) but currently a new episode of its Feature Discovery series makes it to alpha testers on a bimonthly basis. These are deep dives into particular features or fundamentals of aviation sims. So far they’ve had aerodynamics, cockpits, soundscape, airports and IFR.

You can find details on how to join the Insider Program and become an alpha tester, as well as regular updates from the dev team, over on their official site. The most recent alpha signup phase was January 27, 2020.

An hour of leaked alpha gameplay was swiftly removed

One player participating in the playable alpha Microsoft Flight Simulator brazenly uploaded an hour of gameplay to YouTube. The footage depicted a calming flight amidst clouds that eventually turned to a rainy storm and it, predictably, looked gorgeous. Unfortunately, Microsoft quickly acted on the leak and had the video scrubbed from YouTube. It was nice while it lasted.

Trailers aren’t legally binding representations of a game’s final release, and we’ve all been hurt before. But still—the scale and fidelity of the scenes this trailer shows are enough to capture an audience much bigger than flight sim enthusiasts.

It looks like a great means for virtual tourism even if you had zero prior interest in piloting commercial aircraft and absolutely no prior knowledge of how to request a runway with your nearest ATC tower. And for those who do have some skin in the flight sim game—well, it’s Christmas come… whenever the game comes out.

You can fly anywhere in the world in Microsoft Flight Sim

This is the knockout blow for anyone on the fence about it so far—literally anywhere in the world. Our whole planet is mapped and modeled, ready to be flown across from tens of thousands of airports. Our own Andy Kelly tried his damnedest to disprove this big claim from the devs, embarking on flights over Glasgow, Mount Fuji, New York JFK and more. Turns out: Yep, it’s true. And there’s no discernible drop in detail from one location to another, either.

This being a Microsoft game, all terrain data is pulled from the tech giant’s search engine, Bing. That’s right, Bing, the butt of so many jokes over at the Google offices, is finally getting its moment in the sun.

That data only gets you so far though, of course. The topography of each area still has to be fleshed out, trees and buildings added, traffic in the streets, that sort of thing, and the dev team are using a learning AI. That’s right, it’s an all-star cast of Microsoft properties: Azure’s on the case. (If you don’t know what Azure is, just Bing it. Or read these next words: it’s a cloud computing service).

If the developers had to manually drop wireframe models over a 1:1 scale replica of planet earth until it looked satisfyingly populated, the game’s development would become a family business passed down countless generations. Instead, Azure interprets the raw map data and knows where to populate it with the appropriate scenery.

The weather system runs deep here. Clouds cast shadows over the landscape below, and over each other. They’re built from 32 volumetric layers, too, which makes them look far fluffier than the usual skyboxes you see when you look up in games.

Cold and warm fronts move around the globe, creating rain and storms as they go. And those storms in turn affect your plane’s handling, as one would expect. But with an aerodynamics simulation which runs up to 1000 surfaces simultaneously, it’s fair to say this will be a frighteningly accurate depiction of how hard it is to stay on course when the rain and thunder roll in.

And—AND—it uses real-world weather data to simulate its own weather systems. If you decide to fly over Hoquiam, WA next Wednesday and it’s raining there in real life (a safe bet) then it’ll be raining in Microsoft Flight Simulator. That even extends to more extreme conditions like snow, although it’s not clear yet whether rivers and lakes will freeze over accordingly.

Formed in 2002, Asobo has a long list of movie tie-ins and PC ports on its CV, but it’s probably fair to say it didn’t arrive on most people’s radars until 2019 when A Plague Tale: Innocence shipped. Great action-adventure-horror-stealth hybrid, that.

Not a flight sim though, is it? This is Asobo’s first simulator release, but it does have priors with Microsoft tech—some HoloLens software released in 2016—and with building enormous areas. Fuel, way back in 2009, was a post-apocalyptic open-world driving game and at the time held the world record for the largest playable area, some 5,560 square miles.

This is a topic of white-hot debate in certain corners of the internet. On the one hand, it’s obviously a gorgeous game with a ton of fidelity in every frame, so you’d imagine a pretty substantial machine would be required to run it smoothly, particularly at 4K as is shown in the reveal trailer.

On the other, will Azure’s cloud computing heft take some of the sting out of running it locally?

At present, the best indication we have is from alpha testing. It’s important to stress that this isn’t representative of final game performance, but having 32GB of RAM seemed to be a common factor in inclusion to the latest alpha program. You can extrapolate the level of other componentry from there but again, this is alpha testing!

Previous incarnations of the series were famously demanding. I’m not even 100% sure you could get a solid 60fps out of Flight Sim X with an RTX 2080 Ti. Azure may be the ace up Microsoft’s sleeve this time.

It’s certainly—and I quote head of Microsoft Flight Simulator Jörg Neumann—a "high priority" for the team, following fan feedback and the common assumption that there’d be full VR support based on the reveal trailer.

VR at launch can’t be guaranteed though, says Neumann. The team is currently working on its implementation though, so it seems like a when, rather than an if.

What about Microsoft Flight Simulator mods?

This was a massive aspect of the previous Flight Sims, and it supported third-party devs who created nothing but maps and planes for virtual pilots willing to pay for them.

While it doesn’t look like there’ll be the same imperative to pay for third-party map data this time, planes are always an area of expansion.

We think it may well work in a fashion similar to Minecraft Marketplace, whereby both free and paid community content is curated and presented in moderated fashion.

Will it be better than the Excel ‘97 flight sim easter egg though?

No. That remains, as it will always remain, the pinnacle of rigorously simulated aviation.