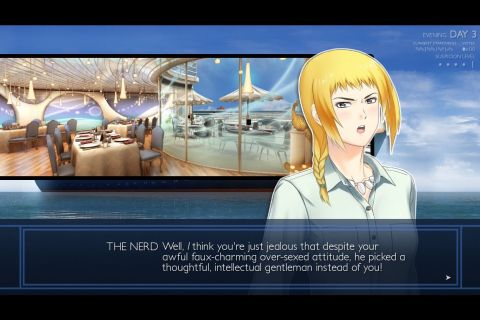 Problematic in some areas, but overall a really good, thoughtful move towards better sex games.

The actual, full title of sexy sex visual novel Ladykiller in a Bind is 'My Twin Brother Made Me Crossdress As Him And Now I Have To Deal With A Geeky Stalker And A Domme Beauty Who Want Me In A Bind!!', which, uh, tells you pretty much everything you need to know.

Your twin brother has kidnapped you and is forcing you to pretend to be him on a cruise full of exceedingly randy teens from his school. At the same time, a 'Game' is going on—it’s all very Danganronpa, really—in which you have to win votes for a chance at a $4 million prize. You have to balance two statistics: votes, which are done in a tally, and suspicion, which leads to a game over if you get to five points. Suspicion points are earned by doing things that your brother wouldn’t do, like being overly nice, kind, or naked. Because your brother doesn’t have boobs.

Unlike most visual novels, your dialogue choices are timed—you can choose the first one that appears, you can wait for a few more sentences to choose something that might be slightly better, or you can ignore all options and just go with whatever the protagonist decides to say (which is usually nothing, if you pick no dialogue options). This is a really interesting dynamic, because it makes conversations feel real and hides a lot of the visual novel framework.

At the heart of it all, you are pretending to be someone you’re not—you’re a woman pretending to be a man, and a stranger pretending to be their classmate. Can consent ever be fully received if you’re fundamentally lying about who you are? It’s also a bit weird that in one scene, you get given a “safe word” but seemingly not the option to ever use it, which, sure, would stall the whole scene, but that’s the whole point of safe words—even if, in this case, they would be for the player and not the character. Weirdly, the character imposes her own preferences on the player, with 'Honest' choices popping up about things you enjoy, even if the player really, really doesn’t enjoy them.

There’s also the issue of whether or not the game is actually sexy, although, to be honest, this is more of a personal thing and not the game’s fault. If you’re not really into power-play and words like 'groping' and 'molesting' being used in a sexual context, this game isn’t gonna make you tingle in your downstairs dancefloor. But, again, that’s personal preference, and, well, even if you don’t find that particular dynamic sexy, you’ll still find other parts of it pretty steamy anyway. AHEM. Let’s move on.

There are uncomfortable scenes, though there is the option to skip them, and there is a content warning (“transactional sex, degradation”). These scenes feature sexual acts that are implied to not be consensual, yet the character still seems to enjoy them (here’s one of the points where you get the option to “confess” that you enjoy being forced to do sexual acts against your will. Even if you don’t). There’s also the really creepy narrative framing, in which you’re telling your twin brother about all the sexual acts you’ve been getting up to in the past week, in graphic detail, because he really wants to hear about it. Personally, the idea that your brother gets off on hearing about your sexcapades with all the goopy, sweaty detail included felt really, really unsexy.

Despite all this personal preference and occasional discomfort (and one extended instance of extreme unpleasantness), Ladykiller in a Bind is doing important work when it comes to the portrayal of consent and interesting sexual dynamics. Most sex games are pretty vanilla and are written very much from the male gaze point-of-view, and while Ladykiller isn’t all that diverse when it comes to its cast of characters, who are mostly skinny, white and entirely hairless from the neck down, it’s still making leaps and bounds in other areas.

When sex games can actively represent the diversity of sexuality, fetishes, turn-ons and kinks while still showing that respect and care are important in any level of sexual relationship, then we’ll have got somewhere good. For now, Ladykiller is a good start.

Ladykiller in a Bind

Problematic in some areas, but overall a really good, thoughtful move towards better sex games.