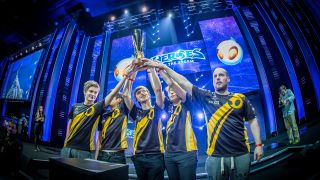 With a hailstorm of confetti hailing down around them, Korean and American team Gen.G hoisted the Heroes of the Storm Global Championship (HGC) trophy at Blizzcon last year. A new hero was announced at the opening ceremony the day prior. In that moment, the future of HotS looked bright as the 2019 professional season loomed. Then a month of complete silence rolled by. Blizzard didn't issue so much as a peep about the pending season of competition. Professional HotS players, many of whom were already toiling away and preparing to chase next year's championship, were growing suspicious.

On December 13, without warning, plans for a 2019 Heroes of the Storm Global Championship season were unceremoniously cancelled. Commentators found out that morning while some pros were alerted mere minutes ahead of the announcements via email. Others didn't even find out their careers were over until after the news was made public. But the message was clear: Heroes of the Storm's pro scene was dead.

"My heart was crushed. I was living my dream life and doing what I loved, and overnight it ended. I felt depressed and betrayed," Filip "SmX" Liljeström, a Swedish player formerly with team Fnatic tells me.

"The first emotion I think a lot of us felt was just anger. Anger that their last few years of hard work and dedication had come to a sudden halt. Anger at the fact that it took as long as it did to get a response from Blizzard to end HGC, only a month before the league was projected to start. And angry because they now feel lost. Everything that they had built their lives around no longer existed," Wade "Dreadnaught" Penfold, a retired pro player turned commentator, adds.

Penfold dropped out of college to chase his dream of becoming a professional HotS player. He recognized the risk, but says he didn’t want to look back at his life with regrets over the chances he didn’t take. And, for a time Penfold had no regrets. He competed at the highest level, saw the world, and made lifelong friends. Then three years ago, he decided to retire from his role as Tempo Storm’s captain and as a professional player. Before long he was enjoying his new role in the scene as a commentator. He uprooted his life to move to California, where the HGC studio was located.

When Blizzard cancelled plans for a 2019 HGC season, Penfold was devastated. "Now I live in one of the more expensive parts of the country for a job I no longer have. I have a background with financial turmoil in my family and it has left me to be very timid with any risky financial decisions. But, now, I felt as though I was forced into the one tough circumstance that I had fought so hard to avoid," he says.

It wasn't just Penfold who was left reeling from the sudden cancellation of Heroes of the Storm's biggest championship circuit. All of his friends and peers were just as surprised. "It was hard to do anything but watch their streams and cry with them."

Now, Penfold is attempting to pick up the pieces by streaming and commentating other games like Rocket League and Apex Legends.

He's not the only one trying to scrape together a career in other games. I'm told that many are hoping that the similarities between Heroes of the Storm and other MOBAs can help them transition into games like League of Legends or Dota 2. But doing so will be extremely difficult, given how massive and competitive those scenes already are.

Switching games isn't impossible, as Vilhelm "POILK" Flennmark knows all too well. The world-class ranged carry formerly of Team Dignitas was originally a League of Legends player who turned to Heroes of the Storm three years ago after growing dissatisfied with LoL. Now he is returning as a refugee from Blizzard’s dying MOBA. "I really didn’t enjoy [League of Legends] at all, I got really frustrated at the game and decided, in the end, to just quit," Flennmark says. "Now I am super addicted to it and just play countless hours to get good at it again and hopefully become something in it."

Flennmark credits his rekindled love for League of Legends with improvements made to the pacing of matches and the added emphasis on personal skill and performance since he last played it. But beyond his goal to transition to being a full-time LoL pro, he has no plan B. Fortunately, unlike Penfold, Flennmark has the luxury of time on his side and is in no rush to make money.

He was no slouch when he quit LoL, but now that he has years of professional experience under his belt in another MOBA, he feels confident that he can re-adjust and climb the ranks. His instinct does not appear to be wrong. He currently plays for Swedish team The Final Tribe, which just recently took 2nd in the Swedish Esports League Season 2: Division 1 tournament. "The only thing I miss is going to be the people I got to know from Heroes and the fans during events that I won’t be able to meet and play in front again," he says.

His passion for HotS, he tells me, is sapped. "Even if I don’t find success in League, I wouldn’t go back to Heroes. I don’t feel any regrets at all. Heroes leaves a bit of a bad taste in my mouth."

Filip "SmX" Liljeström, formerly of Fnatic, is trying his hand at something different: Smite. His decision was calculated. Not only does he enjoy it, but he looked at both the stability of the scene and size and thinks it might be easier to break into than a larger MOBA. He hopes that he can jump to the top relatively quickly, but said that it is too early in his Smite career to tell how much the fundamentals built up from years competing in HotS have helped.

He does miss the shorter games, variety of the map pool, and diminished emphasis on laning stage from HotS, but has no regrets about switching. "HotS is a sinking ship," he says. "I'm not worried I made the wrong choice to focus on becoming a pro in Smite." If Smite doesn’t work out, he plans to go back to school and to work a "normal" job, but did not elaborate on what type of degree he intends to pursue.

Unlike Flennmark, Cailleux does not believe that time is on his side. At 26 years old, he does not have the luxury of trying to go pro in another game. He explains that if he were a few years younger he would actually be trying to transition not to another MOBA, but to a first-person shooter.

"I had the dream to bring my family to at least one event and to buy a car for my mom in 2019. You can guess that, right now, it’s not possible anymore," he tells me. "I don’t really know how all the players reacted to that but for my part that was like a big back stab." Still, he says he loves the game itself and the community that formed around it enough that he wants to try to "save" it. That this could be the wrong decision isn’t lost on him, but Cailleux feels like he has no other options.

Even without official support from Blizzard, players like Penfold and Cailleux are hopeful Heroes of the Storm might still have a competitive scene driven entirely by its players. "I think that HotS does have a bit of hope to continue as a grass-roots scene," Penfold says. "The game has a lot of people that are still very passionate about it and are willing to stick around no matter the case. Those people I think will have to be a driving force in the scene, but if they band together I think it is likely that people will compete and a lot will join in and view the events."

He knows that it’s a longshot, but for those still clinging to hope, it’s the only shot they have.