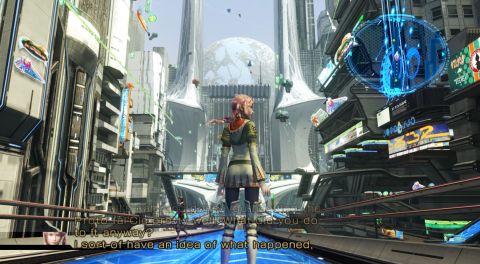 A better game than XIII but with an intolerably bad story, this is a still-flawed sequel that clearly isnt at its best on PC.

The Final Fantasy XIII trilogy is a bizarre series of games, with each sequel clearly fashioned around the reactions of its fanbase. Final Fantasy XIII, which I reviewed last year, was a cloyingly linear affair with a brilliant combat system—by contrast, direct sequel Final Fantasy XIII-2, released on consoles in early 2012, is so freeform in structure that it’s sometimes hard to keep up with what you’re supposed to be doing. While it’s a better game for the most part, it comes with a whole host of new problems, and is almost as bad a port as its predecessor.

Set a few years after Final Fantasy XIII, Lightning, the moody hero of that game, has vanished into the realm of Valhalla, which in this game is famed for its spiky-haired rulers and prolonged QTE sequences. It’s up to her sister, the impractically-dressed FFXIII supporting character Serah and a displaced Valhalla native called Noel Kreiss (a straight-to-DVD Squall with the dumbest name ever) to look for her. Instead of XIII’s near-endless shiny corridors, an initially confusing time travel concept guides XIII-2’s structure.

Opening a ‘time’ gate (sigh) in the first region of the game opens up the Historia Crux, a menu screen which lets you select which environment you’d like to go next and tells you what year it’ll be when you get there, sort of like a halfway point between a timeline and a fast travel screen. Environments tend to appear more than once in different timeframes, separated by up to hundreds of years, and story beats frequently rely on you going backwards and forwards between familiar places to mess with cause and effect.

It’s a refreshing but convoluted structure. Usually your progress is slowed down by needing to obtain an item or two from another part of the timeline, and it’s hard to catalogue exactly what’s going on in your quest line—it wouldn’t hurt to have a button that prompts a ‘go here next, genius’ message. When you’re progressing at a decent pace, poking through new time periods, fighting giant bosses, exploring big environments and quickly figuring out where to go next, XIII-2 is classic Final Fantasy and deserves to be lauded as such. But then there are big stretches with unskippable battles and dreadful ‘90s-era switch puzzles that expose a developer that’s blatantly out of its depth. XIII-2 is one of the weirdest Final Fantasy sequels—it feels like a team trying to give their audience what they think they want and only half getting it right.

I would say you need a pre-existing history with Final Fantasy XIII before you even consider buying XIII-2, whether you liked it or hated it. The story is truly awful, far worse than XIII’s, with interminable cutscenes and two lame protagonists that never feel like leads in the way that Lightning did in XIII, or indeed Cloud and Squall did in the earlier titles. Noel is a walking and talking spiky-haired nothing in big pants, while Serah is so boringly polite that she almost makes a case for why every Final Fantasy hero needs to be a miserable and broken human being (yay RPGs!). While I never enjoyed the story of XIII-2, which piles on new characters without any effort to create emotional investment in them, the tone of the world is really laid back and pleasant, particularly in the first half of the story. Towns, explorable environments and interactive NPCs all return to the series, having been nixed by XIII, and they’re all welcome staples.

There are some obvious improvements to the pacing, too. Unlike XIII, which holds your hand through the first ten hours as it tediously explains how the battle system and progression work, XIII-2 gives you the ability to start levelling up each of your character’s job roles right away. The combat, which automates your party’s attacks as you tactically change their job roles in battle on the fly, is functionally identical to XIII’s. Instead of a third party member to battle alongside Serah and Noel, players deploy monsters into their party as allies that have their own classes and attacks. You can even team up with the series’ signature giant bird, the Chocobo, as it mauls creatures in the face with its mighty beak. It’s no deeper than a bit of menu management, but it offers lots of flexibility in battle strategies.

It’s a shame that with this excellent combat system comes some really bad examples of quest design. Chasing after sheep to collect wool marks a low point, and one asshole near the start of the game asks Serah and Noel to transcend time and space to fetch his niece a flower that only grows in the winter—I had to complete the former, but the latter is such an obviously tedious bit of filler that I didn’t bother. A weak story means that most of the quests lack a bit of energy.

Further problems stem from rough stabs at variety that do not pay off. Intrusive boss fight QTEs, which were on their way out of mainstream games when XIII-2 originally released on consoles in 2012, are now so oddly dated that they’ve become gaming’s Ugg boots or Timberlake trilbies. One poorly-judged and irritating platforming sequence near the story’s denouement feels like it belongs to a different game entirely, while the newly added dialogue options are an entirely pointless concession to the success of contemporary Western RPGs that only highlight the bad dialogue.

There are further caveats with this port, too. Unlike XIII’s original 720p-locked release, XIII-2 does have a bare minimum range of visual options: resolution settings, anti-aliasing and shadow resolutions. The obvious unaddressed problem is framerate. It’s a little cheeky that the Steam page boasts about 60fps when achieving that is so infrequent on even a moderate rig. I’d say XIII-2 is playable on my GTX 780-equipped home PC, but annoyingly slow on my mid-ranged PC at work, regularly dropping down to around 20fps at 1050p with mid-level anti-aliasing and shadow settings. Durante’s assessment covers the issues with this port in-depth, but for those seeking out the definitive version of XIII-2, this really doesn’t feel like it.

XIII-2 is a complicated and inconsistent sequel, then, and one I can only recommend to a subsection of the series’ audience. It is better than XIII. This fixes a lot of its predecessor’s structural problems, focusing on the airtight combat and sensibly dialling up the exploration, but tries its hand at a bunch of new ideas that entirely fail. This feels like a game crafted around a survey of unhappy fans and, as such, is one of the oddest Final Fantasy entries to date.

A better game than XIII but with an intolerably bad story, this is a still-flawed sequel that clearly isnt at its best on PC.