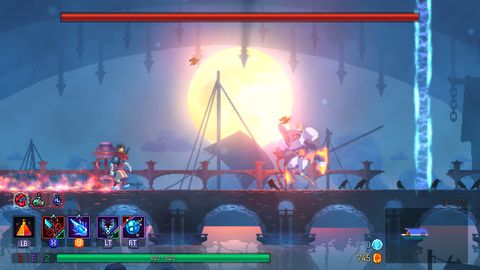 A stellar action platformer with gorgeous presentation and excellent combat. Punishing but worth it.

Dead Cells has robust DNA. This is an action platformer with Castlevania’s intricate environments and gothic bestiary, wed to Dark Souls’ exploratory structure and sense of risk. From Diablo it inherits weapons with randomised effects and deep combo potential, and from Spelunky it learns how to create that ‘just one more run’ feeling with new surprises and challenges to discover the deeper you go. This is an ambitious act of synthesis, successful because each of its component pieces has been executed beautifully.

It’s gorgeous, for a start. Smooth animation, evocative pixel art and gratifying effects cast Dead Cells in a good light from the off. Its moody fortresses and haunted villages are atmospheric but never drab, and each zone introduces a new splash of colour to the game’s palette. Defeated enemies erupt in a shower of glinting gems and weapons strike with gratifying force thanks to on-point sound design.

These touches gild a superbly-executed movement and combat system. You have a double-jump and a dodge-roll that grants a brief but vital window of invincibility. You can chain these into mid-air dodges and powerful ground-slam attacks. You can bust through wooden doors to stun enemies with a satisfying crunch and leap from chains to dodge projectiles and reach new areas—and that’s without factoring in your arsenal.

At any given time you can carry two weapons and two items. The former range from swords to spears, bows, throwing daggers and hammers, each with multiple variants, special combo attacks, and the potential to drop in rarer forms with even more stacking effects: like bonus damage against bleeding enemies, or causing corpses to explode. Items include various kinds of grenade, traps, and turrets, with their use mitigated by a cooldown. You’ll start off by using whatever’s to hand and eventually figure out optimal combinations.

Your access to gear is gated by Dead Cells’ progression system. As you play, you collect cells from fallen enemies. These can be spent in safe areas on various permanent upgrades—like more uses of your health-regenerating flask, or the ability to hold on to more of your gold after you die. Most importantly, you can invest cells in item blueprints. You’ll find these as you explore and kill enemies, and once you’ve spent enough cells you unlock a new item which can then be found in subsequent runs. When you die, you lose all of the cells you’re currently holding and are reset back to the start of the game with your upgrades in place.

You’ll earn a rush of upgrades at the start of the game, with the pace slowing—and tougher decisions to be made—as you get a little deeper. Unlike a traditional ‘Metroidvania’-style game, you’re not wholly reliant on specific upgrades to progress: the ones you really do need, like the teleport ability, you’ll earn early.

The world itself is split up into zones, with each playing host to its own unique enemies and secrets. You’re rewarded for both sticking around to try to garner as many rewards as possible from an area and for speeding ahead. Dead Cells’ strength as a roguelike comes from the way it lets you choose the kind of run you’d like to embark on—levels are rearranged every time you die, but not to the extent that they become unrecognisable. Instead, mastery means discovering what the quirks of a given environment are and how to recognise areas where the best rewards are likely to appear. The hunt for cells can feel like a grind at times, but Dead Cells’ true progression system—and its long-term appeal—comes from developing your understanding of how this evocative dark fantasy world fits together.

Dead Cells' punishing structure can cause grief. Its boss battles are well-conceived and gratifying to overcome, but being reset back to the start of the game every time you die makes it a slog to practice against them—something that Dark Souls or Castlevania players, with their nearby save points, take for granted. Similarly, you might grind away to unlock the right weapons for an encounter you've been struggling with, only to find that they don't spawn at all in the run where you need them. And when a good run goes south, it's always heartbreaking. This is an excellent game, but it can be pretty mean sometimes. Or to put it another way: this is one of the best games I've ever quit in frustration.

Even so, perseverance has its rewards. With experience comes knowledge of which weapons and encounters to prioritise, which routes to take, and how to get back to those tricky boss battles faster. When it all starts to come together, frustration fades and your love affair with Dead Cells' phenomenal fundamentals can start all over again.

A stellar action platformer with gorgeous presentation and excellent combat. Punishing but worth it.