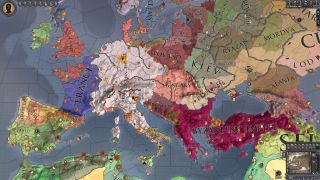 1. Pick a leader, and give them over to computer control.

2. Use console commands to help them out.

3. Don't use the console to (directly) kill anyone.

This diary was originally serialised in PC Gamer issues 318, 319, and 320. For more quality articles about all things PC gaming, you can subscribe now in the UK and the US.

As much as I’ve enjoyed Crusader Kings II over the years, I’m still not good at it. Sure, I can embroil myself in drama and intrigue just as well as the next aristocrat, but when it comes to ambition—to expanding my kingdom and crushing my enemies—it almost always goes wrong. To counter this failing, I’ve devised a new strategy: don’t play Crusader Kings II.

At least, don’t play it directly. Instead, I’m going to pick a character and use the ‘observe’ console command to hand them over to the AI. Then, as the computer does all the heavy lifting, I’ll offer support in the form of other console commands. There’s a lot I can do here: give characters gold, prestige and piety, add or remove traits and even set lovers or rivals. I can also murder people with the ‘kill’ command. I decide against using this latter option—it’s a little too powerful, even for someone setting themselves up with godlike powers.

I load up the game, enabling all DLC packs (thanks Steam sales!) save for Sunset Invasion—an alternate history pack that imagines what would happen if Aztecs crossed into Europe to destroy your save file. I opt for a traditional 1066 start, and begin hunting for a character to adopt. I figure a duke would make for the best ward—I want to see if, with the right prodding, they’ll make a play for the throne. While absentmindedly clicking around the de jure duchies map, I stumble upon Matilda di Canossa, Duchess of Tuscany.

Matilda holds a chunk of central Italy, and also has vassals overseeing Corsica, Lucca and Cinarca. She’s also young and has small family—hopefully ensuring a life free of jealous siblings. And if she’s feeling ambitious, Matilda’s liege is Kaiser Heinrich IV of the Holy Roman Empire.

First, though, Matilda needs to get her house in order. She’s popular among her vassals, which is good, but her advisors leave much to be desired. Her Spymaster in particular is deemed an incompetent schemer by Crusader Kings II’s rating system. Luckily, I can help with this. Using the console, I upgrade the key attribute of each member of Matilda’s court. Then I raise all of Matilda’s stats, and give her a boost to money, prestige and piety.

I unpause, and Matilda’s treasury immediately empties. I soon see why, as armies start marching out from her provinces. Some troops head north, joining Kaiser Heinrich’s war with France over the county of Zeeland. But Matilda has also started a war of her own to convince the Count of Gallura to become her vassal, thus extending her territory into Sardinia. A 4,767-strong army begins a siege of Gallura’s towns and castles. This will not be a long war.

While waiting for the wars to end, I notice Matilda has gained some life goals. The first is to marry a ruler. “The ambitious Duchess Matilda thinks that marrying a ruler would be an excellent way to climb the social ladder,” the game explains. My hope is that Matilda’s AI brain will have the good sense to marry matrilineally, thus retaining her title and status rather than handing it off to some rando dude. Matilda has also launched a plot to kill her Marshal, Count Anselmo di Lucca. I’m not sure what the point of this is—perhaps murder is one of her hobbies?

The war against the Count of Gallura is won in January 1068, with Matilda adding another vassal to her court. Things settle down soon after—in May, Matilda throws a fair, which, thanks to me further boosting her coffers, should be lavish. In June, it’s revealed that Matilda is pregnant. Thanks to the debug info I’ve enabled, I can see that the father is Matilda’s Court Chaplain, Bishop Lealdo. And look, I’m not here to judge. All I’ll say is that Lealdo’s ambition is to become a paragon of virtue so it seems like he’s got a ways to go.

Rather than let pregnancy slow her down, in October 1068, Matilda starts another war to vassalise yet another Sardinian count. This time she takes command of a 7,493-strong army, leaving behind another 3,000 troops to defend the mainland. In December, she gives birth to Ermenegilda di Florenz, presumably on the battlefield.

The endgame of Matilda’s vassalisation wars comes the next year, when in December 1069, at the age of 23, she declares herself the Queen of Sardinia and Corsica. And yet none of her stated aims have been fulfilled. She’s unmarried—a problem, because her illegitimate daughter can’t inherit her title, meaning everything would pass to Kaiser Heinrich in the event of Matilda’s death.

She also still hasn’t murdered Count Anselmo of Lucca. A little digging has revealed that Matilda is the heir to the county of Lucca, but also that Anselmo has been abusing his position of Marshal—both possible reasons why she wants him dead. I think I can help with this. While my self-imposed rule prevents me from killing Anselmo myself, I still left myself some loopholes in case such a situation arose.

I find Matilda’s Spymaster, and… wait, why is he an idiot? I specifically made him a masterful schemer to counter any potential assassination attempts. I check Crusader King’s II’s character database, search through Matilda’s realm, and realise what went wrong. At some point, she decided to fire the man I transformed into a genius plotter, and replaced him with the Count of Gallura, a man with no intrigue whom she once declared war on. This is, I feel, a bold choice. It’s certainly not one I’d have made had I been in control. Still, this is the bed I have made, and now I’d better fix it before the legs fall off.

Firstly, I restore the original Spymaster’s original intrigue score so it’s back to pretty much nothing. He was annoyed at Matilda for firing him, and that’s just an assassination waiting to happen. Then, I raise the Count of Gallura’s intrigue, remove some of his more erratic traits, and add positive traits that match some of Matilda’s own—raising his opinion of her due to their shared outlook. When I’m finished I have a new master Spymaster who’s happy to overlook all of that war business from a few years before.

Finally, I use the ‘murder’ command. No, don’t look at me like that. The console’s ‘murder’ command is very different to the ‘kill’ command. The latter simply makes your target be dead. The former requires you specify a murderer who will attempt to kill the target. That means there’s a chance the murder will fail—although given that I’m asking Matilda’s new master assassin the Count of Gallura to murder the oblivious and corrupt Anselmo, it seems unlikely. Sure enough, Anselmo is killed, and one of Matilda’s primary aims has been achieved.

Over the next few months, Matilda starts to consolidate the Sardinian part of Sardinia and Corsica. The Counts of Torres and Arborea join the kingdom peacefully, and the Sardinian island is handed over to Duke Constantino. The only holdout is Cagliari, on the southern tip of the island. It’s owned by Abd-al’Haqq, a revolter who broke off from the Zirid Sultanate. He’s now fighting a war on three fronts—one of which is against the entire Holy Roman Empire.

While the Empire and Sultanate do their thing, Matilda launches a war of her own—as seems to be her wont. This time she’s fighting to make Count Jordan of Capua her vassal. This is notable for being the first major war she’s waged on the Italian mainland. With Corsica and Sardinia almost entirely under her heel, is she now making a play for Italy itself?

Unfortunately, the war isn’t going well. Not because of a lack of troops—Matilda’s leading a 12,000 stack against Jordan’s 1,106 troops. The problem is her army has camped out in Spoleto for some reason, while Jordan gets on with attacking Florenz. This is incredibly frustrating. Matilda’s army just sits there doing nothing as the Warscore tips in Jordan’s favour.

Using the ‘play’ command to take direct control of Matilda’s army is clearly cheating, so I just have to let things play out. Almost out of desperation, I give her the Brilliant Strategist trait, although I’m pretty sure that’s not going to do anything. Sure enough it doesn’t. Luckily for Matilda, someone else takes action instead. The neighbouring Serene Doge Tedice of Pisa sends an army in to Florenz, not to fight Jordan himself, but rather the bit of his army on loan from the Queen of Croatia. It turns out that Jordan’s late wife was the 11-year-old queen’s mother, and so the two are allies of a sort.

With the reinforcements driven back, Jordan doesn’t have enough troops to siege Florenz. Matilda still doesn’t attack, but a stupid stalemate seems to become the new status quo. While I’ve been focused on this dumb conflict, it seems a few other things have been going on. Matilda has been made High Almoner of the Holy Roman Empire by the new Kaiser, Ordulf ‘the Drunkard’. On the subject of nicknames, the 29-yearold Matilda is known as ‘the Confessor’—perhaps because of the bishop tryst?

In early 1076, Matilda marries King Shabsai. He has no relatives and no claims to land. Also, the two despise each other, in part because Matilda is now pregnant with the child of the Duke of Corsico. Despite their mutual hatred, Shabsai seems harmless, meaning there’s only a 50% chance of me asking the Count of Gallera to murder him.

In September 1077, things take a dramatic turn. Matilda joins with the former Prince-Archbishop Giovanni-Enrico and launches the Holy Roman Revolt against Kaiser Ordulf. Supporting this is a handful of counts and dukes. Even with Matilda’s giant army, I don’t like their chances.

I intervene, first changing the opinion of Ordulf’s vassals against him. This doesn’t take long: he’s disliked by most people. Then, I figure I might as well go the whole way, and deliver Ordulf to Matilda’s prison. This is the final straw. The revolt’s armies were already holding their own, but with the leader of the Holy Roman Empire behind lock and key, the war is won. As a result, the Queen of Sardinia and Corsica secedes from the empire, gaining full independence. What happens next will be interesting: the Empire still exists, and it’s not at all happy with Matilda. But for now, things are going well.

Phil leads PC Gamer's UK team. He was previously the editor of the magazine, and thinks you should definitely subscribe to it. He enjoys RPGs and immersive sims, and can often be found reviewing Hitman games. He's largely responsible for the Tub Geralt thing, but still isn't sorry.