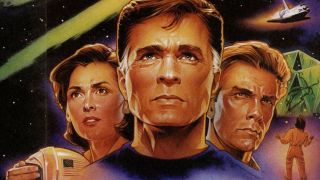 I like to leaf through the PC Gamer archives to remind myself of what games were like way back when, and how far they’ve come. And one of the most entertaining things to look at are the old ads that used to appear in the magazine alongside the articles. In hindsight they’re a fascinating snapshot of particular periods of PC gaming, and here are some of the best.

A distinctly early 2000s example of graphic design that leans into Deus Ex’s freedom of choice. We correctly predicted that it would be game of the year, and it remains one of the best immersive sims on PC to this day.

Who could’ve guessed, based on this illustration, that The Elder Scrolls would one day become the biggest RPG in the world. This has aged terribly, but I love that old Bethesda logo. They should totally bring that back.

Now this is gorgeous. The Dig is one of LucasArts’ weaker point-and-click adventures—here’s a retrospective I wrote a while back—but this beautiful artwork really makes me want to go back and play it again.

A curiously understated advert for Duke 3D, printed a year before the game was released. It’s interesting reading the features list and seeing what PC gamers considered desirable features back in the mid-1990s.

This advert for the CD-ROM version of X-Wing is riffing on the fact that, a couple of years earlier, George Lucas revealed for the first time that he was making another Star Wars trilogy. But I’d rather play X-Wing than watch the prequels.

I love this, and not just because of Sam Lake’s gurning digitised face. The red typography is bold, and that dramatic tagline really cuts to the core of what the game is. And now I’m reinstalling Max Payne.

The PC port of Metal Gear Solid was sadly inferior to its PlayStation counterpart, and buggy as hell, but it did have some neat features including the ability to play the whole thing from a first-person perspective and quicksaves.

A bold advert for Tim Schafer’s heavy metal adventure that kinda oversells how action-packed it is. The blurb is cool, though, and I can imagine reading it in ‘95 and thinking it sounds like the most exciting game ever.

Beavis and Butt-Head in Virtual Stupidity (1995)

ScummVM recently added support for this surprisingly decent point-and-click adventure, which I wrote about last year. I love this advert because it reminds me of being really into Beavis and Butt-head in my teenage years.

I’d forgotten how ugly Agent 47 was in the first Hitman game. The line in the blurb about how the AI ‘defines the genre of the thinking shooter’ is interesting, and I like how the Hitman insignia has been a constant throughout the series.

GameTek developed a Street Fighter 2 port for PC in ‘95 that boasted bigger sprites than its console counterparts. This advert pokes fun at other fighting games that were popular at the time, including Mortal Kombat.

Lionhead’s god sim was one of the most hyped games of the early 2000s. It didn’t quite live up to it, but I love this advert and how it neatly illustrates the game’s good/evil system, while also hinting at its sense of humour.

Civilization was single player only, because online gaming was still in its infancy in 1991. But when home internet took off, MicroProse released this multiplayer version of the game and used this striking advert to market it.

Yes, that’s Christopher Walken. The eccentric actor was the star of this dodgy FMV adventure, along with Burgess Meredith and Karen Allen, and his acting has to be seen to be believed. They don’t make ‘em like this anymore.

This infamous FMV adventure was the focus, along with other controversial games of the era, of a congressional hearing. An event that led to this brilliantly provocative advert that wore the controversy as a badge of honour.

Yeaaaaah, this advert for Microsoft’s long-running flight sim hasn’t aged well. I mean, it’s pretty stylish, but it’s interesting how history can give stuff like this a completely new context. One to leave in the history books, I think.