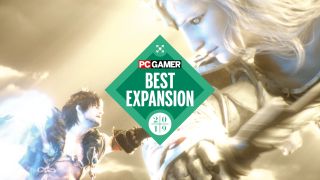 Square's MMO wins our Best Expansion award with this year's Shadowbringers. We'll be updating our GOTY 2019 hub with new awards and personal picks throughout December.

Steven: I'm just going to go ahead and say it: Final Fantasy 14 is the best Final Fantasy game ever made. Though it's an MMO, Square Enix has stuffed it full of the endearing characters and exciting fantasy worlds you'd find in any of the singleplayer games, only here they're a part of a seven-years-and-counting journey that gives FF14 an unparalleled sense of scope and adventure. And Shadowbringers, its latest expansion, is the Avengers: Endgame of that adventure—a thrillingly high-stakes story that pulls upon the previous seven years of world-building to create an intricate and surprisingly human tale.

It all starts when your player and their band of friends is pulled into an alternate dimension called The First. Unlike your homeworld, which is always close to falling to the powers of Darkness, The First has the opposite problem. Years ago heroes defeated the bad guys but instead of peace, they tipped the cosmic balance of the world which is now on the brink of annihilation from primordial light and the terrifying angelic monsters that come from it.

Pulling the main cast into an alternate dimension at such a critical moment in the main story might seem like a needless diversion, but Square Enix doesn't squander the opportunity to deepen the backstory and motivations of its chief characters while also throwing wide the gates on some of its biggest mysteries. It's full of cutscenes that capitalize on climactic twists and turns seven years in the making, giving Shadowbringers a kind of dizzying sense of scale and adventure. At the same time, Shadowbringers might be Final Fantasy at its darkest. Despite the over abundance of light, The First is a grim place. Midway through the journey, for example, players discover a city full of the rich elite who have given up all hope of surviving the impending apocalypse, so they waste their days in luxury while outside the gates beggars starve.

Shadowbringers also shows an uncommon mastery over what makes MMOs fun. There's still some annoying grinding here and there, but each dungeon and boss fight is spectacular and unique, driven by a rousing soundtrack. And because the focus is on the forces of Light being bad, some of the monsters are truly disturbing perversions of religious tropes. The new zones are lush and fun to explore and each class has been reworked to trim the fat and further refine what makes them special.

James: Heavensward is still better by miles (sorry, Steven), but Shadowbringers is still a pretty good season in the epic melodramatic anime MMO, Final Fantasy 14. I played through from the start this summer, over 200 hours of MMO bullshit, endless fetch quests made more than tolerable—fun, actually—from excellent characters, world-building, tunes, and psychedelic dungeons that err more towards interactive music visualizer than the usual MMO stuff.

What other game pits you against a celestial monster made of light miles above the planet and somehow treats it all as a tasteful analogy for class disparity, generational trauma, and catastrophic climate change? Shadowbringers isn't just an MMO with a nice story, it's an MMO with a damn backbone, tackling themes that matter to me and you and everyone we know with big-ass swords and bigger-ass friendships.