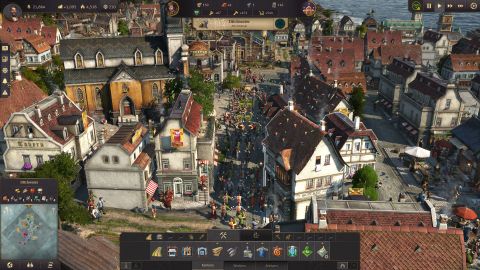 Despite an annoying story mode, Anno 1800 is the biggest and best entry in the series to date.

Anno 1800 belongs to a select group of games that I like to refer to as “blink and it’s 2 am” games. For example, you might sit down in an evening with the plan of setting up your first steel mill. Then you blink and it’s 2 am and you’ve somehow founded a colony in the New World. Alternatively, perhaps you set the goal of reaching the next population milestone to unlock a new building. Then you do that, and the building you unlock is a zoo for which you can build individual enclosures to fill with several dozen type of animals.

This is comfortably the most engrossing city-builder I’ve played since Cities: Skylines, one that combines an intriguing theme with some enjoyably complex production chains and trading mechanics. It also has a wealth of buildings to construct and resources to produce, letting you construct some truly enormous urban sprawls.

Anno 1800 puts you in the hobnailed boots of an up-and-coming business magnate in the burning heart of the industrial revolution. There are three ways to play, Campaign, Sandbox, and Multiplayer. Structurally, they’re all basically the same—the campaign is itself a gigantic sandbox that happens to feature a chain of missions to follow.

Whichever way you choose to play, you start out in charge of a Western-European island with nothing but a trading post to your name. Your first goal is to build a simple farming village, which acts as the foundation for your city. From here, your objective is to grow a bustling metropolis that will stretch its tendrils to the horizon and beyond.

In its early stages, Anno 1800 is a straight-up city-builder. Progress is Anno is predicated upon two things—population growth and meeting the needs and wants of your citizens.. Each “class” of person has a different set of requirements that you need to meet. Farmers, for example, simply require clothes and fish to subsist. But to make them happy, you need to ply them with alcohol. You’ll need acres of potato fields that can be distilled into schnapps, while also ensuring all farmsteads are within staggering distance of a pub.

The better you meet those needs, the more people will fill the houses of your village. Once a farmhouse reaches its maximum population, it can then be upgraded to house the next class of citizen—workers. This unlocks the next evolutionary stage of your settlement, letting you construct more advanced buildings like brickworks and breweries. However, workers are considerably more particular in their needs and wants, going so far as to demand soap, the fops.

At the same time, your production lines become increasingly convoluted. Creating wood to build farmhouses, for example, requires a lumberjack’s yard, a sawmill, and a warehouse to store the goods. Creating steel beams, on the other hand, requires both an iron-mine and a coalmine for the raw materials, a smelting plant to create steel ingots, and finally a steelworks to forge the beams. Larger factories also require dozens, even hundreds of workers to function, so you need the supporting infrastructure in place to keep them fed, watered, and clean.

This is where Anno 1800’s “Blink and it’s “2AM” qualities start to reveal themselves. Once you unlock the third tier of “citizen”, Artisans, you’ll need an infrastructure capable of supporting the production of sewing machines, fur coats, and rum. The latter of these, of course, requires raw materials that don’t grow in a European climate. So to acquire these, you need to build ships and send them to explore the New World.

The New World is represented on an entirely different map, and has unique citizen types, production chains, and resources. This effectively means a game of Anno 1800 plays out on two unique RTS maps at once, which has all sorts of tactical considerations if you’re playing in multiplayer. You could be the King of Steel in the Old World, only to find your economy collapsing because someone in the New World stole an island that produces all your cotton.

Either way, you’ll need to set up trade routes to get these exotic goods to your increasingly needy (and populous) citizenry. It’s worth noting at this point that both sides of Anno’s city-construction are wonderful to watch in motion. The game has a slightly painterly aesthetic that complements the detail of its models and animations beautifully. Your fields of wheat and sugarcane are abuzz with workers, while carriages pulled by horses transport resources to the next stage of production.

These details evolve with your city, too. Clothing fashions change as your city becomes more advanced, while your horse-drawn carriages will increasingly give way to railroads and even bicycles. Such intimate detail does mean Anno 1800 is quite performance heavy. Viewing larger cities from certain angles will likely cause a significant dip in frame-rate on low-to-medium spec machines.

As your production chains expand and the desires of your people grow, the strategic side of Anno 1800 begins to show its teeth. At one point I discovered my starting island couldn’t produce beer, as the soil wasn’t fertile for growing hops. My people quietly informed me of this by staging a massive riot that obliterated my production and almost cost me my game. Needless to say, I promptly colonised a nearby island and set up a second settlement dedicated almost entirely to the production of beer, then organised a trade route to ferry this vitally important resource to the mainland.

The way all Anno’s systems interlock is impressive. If you’re struggling to create a resource yourself, then you can purchase it via your trading post. Yet doing this puts you at the behest of other players (or the AI if you’re playing singleplayer). At the same time, you can sell surplus produce from your settlements for profit. But even a burgeoning economy isn’t a guarantee of success. You still need to be able to either create or acquire the right resources to push your city deeper into the technological age.

In its later stages, Anno becomes a blend of industrial-scale plate-spinning with some broad-strokes RTS thrown in. As competition for resources becomes fiercer, you may need to wrest control of islands from your opponents. This can be done either through military force, deploying fleets of gunboats and frigates to lay siege to their ports. Or you can purchase shares in the island you desire, ultimately taking control in one fell financial swoop.

For the most part, I think Anno’s core systems are elegantly balanced. At times it can make you feel stretched, especially if multiple random events like fires happen at once. Even when had to pause a new project to upgrade a bunch of houses or relocate a low-level farm, however, I never felt bogged down in micromanagement.

That said, I do want to highlight one curious idiosyncrasy. Given the game’s core theme of a shift from an agrarian to an urbanised society, it’s surprising that employment is not more of a consideration. In fact, Anno 1800’s attitude to employment is the polar opposite of the period it is based on. Each household earns a set income regardless of whether the people who live there are have a job in the city or not. This effectively encourages you to have a large surplus of unemployed citizens, as each new house you build brings in that much more coin. As long as you can meet their needs, it’s perfectly fine to have hundreds of people sitting around doing nothing.

I’m not sure whether this counts as a flaw per-se, as there’s more than enough complexity to grapple with ensuring all your different citizens are sufficiently catered for. It’s just odd given how the game is otherwise very conscious of the changing times it represents. A harder problem is that Anno 1800 doesn’t provide enough tools to track your in-game finances. Your income and expenses are constantly fluctuating, and those ever-shifting numbers can make it hard to gauge how well your colony is actually doing. Normally I’d sooner eat my own keyboard than look at a graph in a video-game, but I think Anno 1800 would benefit from a bell-curve or two.

By far Anno 1800s biggest issue, however, is the appalling and incessant yammering of its AI players. Anno 1800s story campaign features a cast of characters that are fully written and voiced. I really wish it didn’t. The acting is hammier than a Doctor Who Christmas special, particularly that of your in-game nemesis Edvard Goode, who would twirl his moustache right off his face if he actually sported one.

Worse yet is the writing of the AI barks, which are often totally inane and uttered every time they interact with you, whether it’s an automated trade or simply a slight decline in diplomatic relations. One AI character declares “I can finally get rid of that pent-up gas!” literally every five minutes. This may seem like a minor problem, but it’s incredibly distracting from what is otherwise a gentle yet utterly absorbing game, like an episode of Better Call Saul being interrupted by the appearance of Keith Lemon.

Script carbuncles aside, Anno 1800 is a rich and sumptuous city-builder, easily the grandest and deepest Anno to date. Its early game is a wonderfully relaxing experience, while the later stages will have you scratching your mutton-chops and happily stretching your braces in equal measure.

Despite an annoying story mode, Anno 1800 is the biggest and best entry in the series to date.