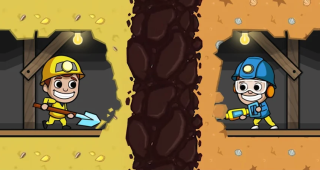 Ubisoft has announced the acquisition of Kolibri Games, a mobile game company that develops and publishes free-to-play idle games. Ubisoft acquired a 75 percent share in Kolibri January 31 with plans for its stake to increase to 100 percent over the next several years.

Berlin-based Kolibri Games is best known for Idle Miner Tycoon, a game where the player hires miners, employees managers, and invests in various upgrades and improvements that make mining more efficient. The idle game has been downloaded more than 104 million times since its release.

"We are strengthening our 'idle' games portfolio with the acquisition of Kolibri Games, one of the leaders in the segment," said Executive Director of Ubisoft Mobile Jean-Michel Detoc. "Whose flagship game Idle Miner Tycoon has grown steadily since 2016."

"We are delighted that this great talented team, recognized for the longevity of their flagship title, is joining Ubisoft."

If you're not familiar with idle games, also known as clickers, you play by just clicking or tapping on the screen repeatedly to get in-game resources. When you have enough of that resource you can buy upgrades that collect it for you. These upgrades work continually in the background  even when you're not playing, hence 'idle.'

If you're somewhat serious about idle games and want to fall down a black hole of clicking, check out Cookie Clicker which, surprisingly, is available to play online.