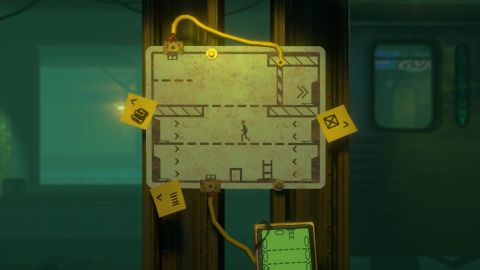 Novel presentation and a masterful complexity curve, but The Pedestrian's very shy about storytelling.

In those moments when your mind drifts away from whatever mundane reality you've put in front of it, do you ever imagine the stickmen in road signs coming to life, and having adventures? No, me either. But it's to everyone's benefit that somebody at Skookum Arts has, because it provides a fine foundation for the studio's platform-puzzler debut.

It might just have easily been adapted into a Pixar short, those precious three-minute marvels that threaten to upstage the feature film to come. Given sentience and agency over the other objects within the signs it occupies, a stick person breaks free from the confines of their painted prison and hops from sign to sign, from subway to street, from mild peril to slightly more pressing peril.

That might not sound a deep enough well of creativity to birth an entire game, but consider this: firstly, the puzzles build on each other in complexity in remarkably well-judged increments and are interwoven between non-taxing platforming sequences. Secondly: it is quite short.

What's most striking about The Pedestrian isn't the craftsmanship of the puzzles themselves, but where they exist within the game world. You're always looking at a 3D environment, technically, but focusing on 2D elements on a flat surface—a whiteboard, a computer screen, the odd blueprint, or most often some abstraction of a public safety or road sign.

Skookum's clever about this unique way of presenting its puzzles. With your attention placed squarely on one element, hints flutter away on post-it notes elsewhere onscreen. As the tasks at hand grow increasingly more involved, the intrepid stick person—you can pick a male or female avatar, by the way—affects not just the arrangement of the signs, but the 3D world surrounding them too.

An example: hooking up one electrical node symbol with another on a particular sign kicks the elevator within which the sign lives to life. Once the elevator starts descending, a miniaturised version within the sign starts up too, providing a path out of the current sign and down to the next. Oh, and the sign after that is found on a lower floor, beyond the elevator in the 3D world.

If that sounds confusing, it's only because words are hard and truth be told I'm still devoting 10% of my brainpower to the bits I missed in The Pedestrian. The interweaving quality between its 2D planes and wider world work not just as a bit of visual interest—and I'm sure I wouldn't have enjoyed this nearly as much if the whole game existed as a procession of signs along a featureless wall—but as markers of progress. In a very real sense, it feels like an adventure thanks to these scenery changes. I'm not (entirely) ashamed to say I felt a bit of a rush when my humble little anthropomorphised symbol brought an entire subway train into motion and disembarked at the next stop. Plucky little guy.

In terms of narrative, it's certainly present in this game, but in the loosest sense possible. You have to actively look for it, think about every detail, notice the phrasings of Steam achievements and the copy on its Store page. In other words, Monkey Island it ain't. The absence of dialogue or, well, any characters either, help your brain to zero in on the task at hand without unnecessary expositional distractions, so it's a sensible design call. I did find myself craving a bit more revelation, though. It's become a bit of a genre staple now, hasn't it? Valve, Jonathan Blow, and Playdead's knack for pulling the rug out from under the player have set a bar for any title that lives and dies by its puzzles in 2020, and although this one doesn't shirk its responsibility to surprise, the soft-touch approach left me just slightly hanging.

While the Pedestrian's wider world gives a sense of forward momentum and a bit of meaning to your actions, the complexity of its mechanics deepens, and the visual language you need to assimilate broadens. What begins as walking through doorways and climbing ladders to hop from sign to sign quickly evolves into rearranging several signs, connecting doorways and ladders to reveal a critical path through them all.

And just as that absorbs into your grey matter, it shifts again. Dragging boxes through the rat runs you've constructed. Using switches and levers to operate bounce pads, pistons, elevators and switchable platforms. Within and hour or so the signs that once looked like cute Pixar short material now resemble circuit board diagrams from your nightmares. The ones where you haven't done any homework for 19 years and you have your final exam in an hour. Multi-area, multi-object tests which make you feel as though all the knowledge and attention required to crack them might spill over out of your brain at any second.

But it doesn't spill over. This ascension through the ranks of friendly to genuinely taxing obstacles is handled with the pacing and intuition of a veteran studio. I am, in all honesty, quite a stupid man. But I never felt hopelessly, 'alt-tab and find the YouTube walkthough' stuck here, and that says much more about Skookum's knack for their craft than my IQ.

It's a game that's clear about what it wants to achieve and does so in neat and tidy fashion, then. Perhaps it's unfair to chastise it for not doing more. Perhaps we've just been spoiled by the likes of Braid, Inside et al, whose reveals and U-turns leave real impact. Spoiled or not, I was left cold by the scarcity of narrative or stylistic flourishes, but fortunately the difficulty spike's gradient is so expertly judged and the presentation so inherently endearing that The Pedestrian can't help but be a joy for its brief duration.

Novel presentation and a masterful complexity curve, but The Pedestrian's very shy about storytelling.