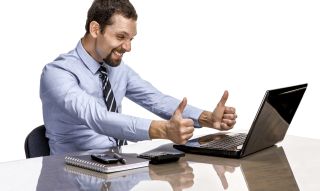 You've seen 'em. You've agreed to 'em. You may have even actually read one of 'em. A EULA (end-user license agreement) is a legal contract between a game publisher and you, the purchaser of the game license, that you must agree to in order to play the game. These contracts are often dozens of pages long, can be altered at any time by the seller, and are non-negotiable.

Well, who says consumers can't draft their own long, one-sided legal document that game companies have to agree to as well? We call it a YOU-LA, and it's for you, the consumer! Just imagine submitting your credit card information, and having something pop up on their screen for a change...

Very important: read this document before you process my credit card information for the software in question, hereinafter referred to as The Game. This constitutes an official and legally binding agreement concluded between you (the Game Company I Don't Entirely Trust) and me, the Consumer (Who Has Been Burned Way Too Many Times).

Simply stating the product is sold "as-is" in your EULA does not absolve you of the responsibility of providing adequate support services. Unless you give the Consumer a chance to fully test The Game in advance of purchase, the Consumer cannot possibly know what the hell "as-is" actually means. As such, you will staff an adequate number of support technicians in the event that "as-is" means "broken as all hell." After all, the Consumer is not giving you "as-is" credit card information with a couple of numbers missing, right? Right.

If The Game requires an always-on internet connection but The Game is a single-player experience, please provide a reason, hereinafter referred to as The Obviously Transparent Lie. Prepare to have The Obviously Transparent Lie mocked, belittled, and quickly disproved by modders (hereinafter known as Heroes). Then prepare to sheepishly remove the always-online DRM in a future patch.

Better still, avoid all this unpleasantness and irreparable damage to your reputation by simply not making the Consumer always be online for single-player games.

You are required to list the specs of the computer The Game Company used for The Game's promotional trailers. If The Game requires, for instance, Oak Ridge National Laboratory's Titan supercomputer to achieve a steady 60 FPS and all those awesome post-processing effects shown in the trailer, the Consumer would sure like to know that in advance.

You are also required to provide footage showing The Game running on a PC using what you consider to be "minimum requirements" because what The Game Company and the Consumer consider minimum acceptable performance are probably two very different things.

You will provide full and descriptive patch notes when issuing an update to The Game. Your patch notes will not simply state "various fixes" were made, which will cost the Consumer the time it takes to see if you've fixed the specific problem that's been preventing the Consumer from enjoying the game, or if one such various fix completely neuters the Consumer's favorite weapon to the point where it might as well just pop out a flag that says "bang" on it. If The Game Company has someone making "various fixes" it surely can't be much of a strain for them to write down a list of these fixes in a text file as they fix them, right? It takes two seconds. Honestly.

The Game Company agrees to make intro logos skippable. These logos constitute advertising and as the Consumer has already purchased The Game, it should be ad-free. The Consumer is already well aware by now that Nvidia definitely considers Nvidia to be the way games are meant to be played. The Consumer gets it. Really.

While we're on this topic, The Game Company also agrees not to make the Consumer look at introductory movie sequences every single time they start The Game. Once is plenty: after the first viewing, the intro sequence should be automatically disabled and only viewable from the main menu. Does The Game Company sit through the intro sequence to Boardwalk Empire or Homeland every time they watch an episode? Of course not, those intro sequences are boring and interminable. (Game of Thrones is one exception, because watching those little cities pop up is cool every single time. Is your intro sequence as cool as Game of Thrones? No? Then we probably don't want to watch it more than once.)

Do we even have to get into this, The Game Company? I don't think we do. Look at you. You're blushing and looking away from the screen. You know what you're doing is wrong. We're not even mad, we're just disappointed. And mad.

The Consumer reserves the right to change, update, revise, supplement, or otherwise modify this YOU-LA at any time in the future (or, should the Consumer gain access to a time machine, which the Consumer recognizes as a distinct possibility, in the past). Changes will probably be based on how angry and frustrated the Consumer gets about any given thing at any given time. Changes will not be highlighted or called out in any way: you'll just have to read this entire agreement again and try to figure what the changes are.

Your continued use of the Consumer's money will be deemed to constitute acceptance of these changes.