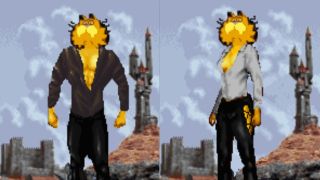 If you've played an Elder Scrolls game you probably know about the Khajiit. They're a cat-like people. Essentially large cats standing on two legs. Fur, tail, the lot. But in The Elder Scrolls: Arena, the first game in the series, the Khajiit look like humans. Unless you install a certain mod.

If you wanted to make the Khajiit in The Elder Scrolls: Arena look more like cats, you have a huge selection to choose from. Cats are all over the internet because they're cute. But the maker of the mod All Khajits are 1978 Garfield chose not to go for one of the obvious images of a cat.

Instead, we get the lasagne-loving Garfield from the original comics. Specifically, his smug and fat-cheeked head, plopped on top of the game's original Khajiit model. That's already quite the sight, a cartoon cat's head on an athletic human-like body, but the modder went further. The finishing touch is making the Khajiit's skin colour the same carrot sick orange as Garfield's fur. There's something disturbing about seeing Garfield with pecs.

Fortunately, as Elder Scrolls: Arena is played in first-person, the only view of your Garfield-Khajiit character you get once you start the game proper is the character portrait in the bottom left. Not so bad as long you don't mind Garfield judging you for the duration of the RPG's campaign. Just hope you don't meet any other Khajiits out there.

Please, no one try to make Garfield part of the Elder Scrolls lore. I don't think I can take it. Isn't it enough that Garfield Kart: Furious Racing exists?