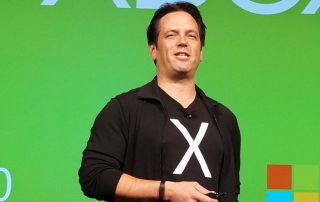 A new console generation will soon be upon us, as Microsoft's Xbox Series X squares off against Sony's PlayStation 5, the latest round in an ongoing slapfight that we generally don't pay too much attention to here at PC Gamer. In a recent interview with Protocol (via The Verge), however, Xbox boss Phil Spencer said that Microsoft is taking a long-term view of the future of the industry as a whole that's definitely relevant to our interests.

"When you talk about Nintendo and Sony, we have a ton of respect for them, but we see Amazon and Google as the main competitors going forward," Spencer said. "That's not to disrespect Nintendo and Sony, but the traditional gaming companies are somewhat out of position. I guess they could try to re-create Azure, but we've invested tens of billions of dollars in cloud over the years."

Azure is Microsoft's cloud computing service, which has actually been around for about a decade now but has only recently started to take an up-front role in games. It's complicated (to me, at least), but Azure underpins services like Microsoft's Game Stack and the upcoming Project xCloud game streaming service, and it can also be put to work in individual games: The new Microsoft Flight Simulator, for instance, will use Azure to recreate the whole damn planet within the confines of the game. (Apparently it works quite well.)

Another sign that Microsoft views itself as operating in a different space than Sony and Nintendo is its willingness to collaborate with them on gaming initiatives, something that would have been nigh unthinkable just a few years ago. Microsoft and Sony announced a "strategic partnership" last year to collaborate on the development of cloud-based technology to support their game and streaming services, and Spencer said that Microsoft is willing to work with them on more front-facing features like crossplay.

Even more significant, though, is the advent of streaming game services made possibly by the growing availability of reliable broadband internet access. Stadia is off to a rough start but the underlying technology works, Nvidia's GeForce Now service has officially launched and shows early promise, and Electronic Arts is working on its own thing with Project Atlas. As the cloud-based AI once said, "It's not the end of the world, but you can see it from here."

"I don't want to be in a fight over format wars with those guys while Amazon and Google are focusing on how to get gaming to seven billion people around the world," Spencer said. "Ultimately, that's the goal."

It reminds me a bit of the kickoff of the previous round of the console wars, when Sony made hay with the Xbox One's positioning as a forward-looking multimedia device with an ad touting the PS4 as a no-nonsense, old-fashioned game console. It was an absolute murder, but the world has changed, and it's not one Sony is likely to get away with again.