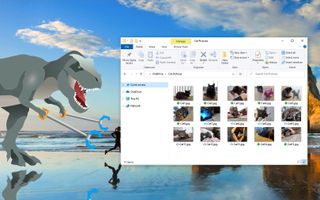 Windows 10 is still a work in progress, which was partially true of previous versions of Windows, just not to this extent. Barring a change in strategy, Windows 10 is the last monolithic release of Windows. The idea is to for Windows 10 to grow and adapt with biannual feature upgrades, some bigger than others. As we approach the five-year anniversary of Windows 10, Microsoft's Windows Insider team is sharing some of the user feedback that helped shape the OS into how it exists now.

The Windows Insider program allows users to install and test future builds long before they are made available to the public. There are different "rings," depending on how often you want to receive new builds, and in what stage of development you are interested in testing. The Fast ring, for example, usually dishes out a new build each week, and Microsoft warns to "be prepared for issues that might block key activities or might require workarounds."

Regardless of the ring, Microsoft encourages Insiders to share feedback, both on bugs they encounter, and on what they like and don't like about certain features.

"As Windows Insiders your feedback has helped drive many changes over the years. From small fixes to big features, you’ve been a key part of helping us evolve Windows. In honor of our fifth anniversary year, we’re taking a moment to look back at some of our favorites," Microsoft says.

One of those features is the GPU performance monitoring that was added to the Task Manager. Third-party utilities like GPU-Z are still far more comprehensive, but GPU monitoring in the Task Manager is certainly a welcome addition.

Microsoft also credits the feedback it received from Insiders for adding a Night light setting to Windows. Found under Settings > Display > Night light settings, turning this on reduces the blue light emitted by your screen to, in theory, reduce eye strain (there are conflicting articles about blue light and whether it really helps).

In addition, Microsoft says Insider feedback helped shaped the Xbox Game Bar in Windows 10. Specifically, the company says it added an FPS indicator, achievements widget, battery level indicator for Xbox controllers, dark and light themes, and a few other tidbits, based on feedback.

There's a lot more that Microsoft credits to Insiders. Without them, Windows wouldn't have a ¯\_(ツ)_/¯ shortcut, or better sticky notes, or the wonderfully convenient audio device switcher. I'm not sure how many of those features would have eventually been added regardless, but it is still interesting to see what Microsoft claims to chalk up to Insider suggestions.