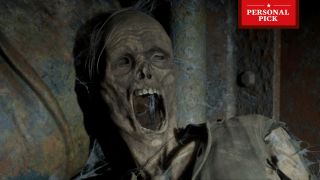 One of the most distressing realisations in Man of Medan comes very early on and put me on edge for the rest of the game. In co-op, you'll often be exploring the same rooms and walking down the same spooky corridors as your buddy, which you'd think would probably put you at ease. It's reassuring to know that you've got a friend shrieking away right next to you when a ghost pops up. Supermassive Games yanks this security blanket away, however, because you can't trust your eyes, or even that your partner is even seeing the same thing. It's oddly isolating, even when you've got someone on the other end of a headset chatting away.

It uses lots of tricks to make sure you're paranoid and discombobulated, and I was surprised how, even though I was always able to talk to my ghost ship buddy, I still found myself caught out by another trap or making terrible decisions, just like a proper horror movie victim. There's never much time to make these decisions, either, leading to stress and panic and more bad calls. It's brilliant.

When the game splits you up, which it does often, hearing the commentary from your partner is perhaps worse than not knowing what's going on. It's like listening to a recording of some unfortunate soul's last minutes, before they were scared to death by an evil ghost. It can be hard to make much sense out of "Oh god, I saw it, oh shit, oh shit!"

What's really impressive, though, is how well everything is timed. Giving someone a good fight also requires good timing, which is hard to do in a game where you've got two people potentially exploring different parts of a ship at their own pace. Sometimes it has to nudge things forward to sync the players up, but most of the time it's like invisible magic, letting you potter around and chat to characters while still making sure you both get to where you need to be at the same time.

There's cooperative storytelling, too. Just like in singleplayer, in co-op both of you will get to play each of the five playable characters. You could decide Shawn Ashmore is a jerk on the road to redemption, but your mate could just play him as a total dick who is just begging to be killed off. To create a cohesive story and characters with a satisfying arc, you need to work together. My Shawn ended up becoming a solid bloke and a bit of a hero, but sadly he didn't make it off the boat. RIP, Iceman.

The scares are top quality. Supermassive likes its jump scares, and particularly cruel ones, and even when I could see them coming, they still got me. There are plenty of fakeouts, but sometimes it's just a matter of something horrifying being delayed by a few seconds—just enough time for it to be a surprise again. On more than a few occasions, the adventure had to be paused because I freaked out and dropped the controller, with accompanying guffaws from my much braver friend. That's perhaps the solitary downside of the co-op mode. Nobody want their mates to know the noise they make when they shit themselves.