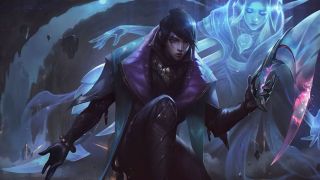 League of Legends’ Aphelios is the game's newest champion, and he's a little more complicated than his predecessors. Riot has come out with plenty of hard-to-master characters over the years, but none of them are quite like The Weapon of the Faithful. But if you’re dead set on making Aphelios your new main, my LoL Aphelios guide will get you up to speed and onto the Rift as quickly as possible.

Aphelios is a member of the Lunari, a moon-worshipping religious order from Mount Targon, a group cast out by the sun-worshipping Solari. While Aphelios trained as an assassin, his sister Alune became a seer: she's able to channel her powers through her brother to assist him in battle. Aphelios was rendered mute by a poison which helped give him his powers, but Alune speaks through him, conjuring the multitude of weapons that her brother uses.

LoL Aphelios release date: when is Aphelios coming out?

Aphelios was available on the testing server for a little while, but he made his debut in the main game in patch 9.24 on Wednesday, December 11.

What are Aphelios’ abilities?

Here’s where things get complicated. All champions in League of Legends have five abilities—a passive, and four spells assigned to the Q, W, E, and R keys on your keyboard. Aphelios, however, doesn’t have an E, and his W is used to cycle between his five different weapons. Each of those weapons has its own Q, and interacts with his ultimate, Moonlight Vigil, in a different way. While Aphelios is holding one weapon in his ‘main’ hand, he’ll also have a backup in his ‘off’-hand.

Each of Aphelios’ weapons has its own strength, but that doesn’t mean that you get to use your favourite one all of the time. You can cycle between your main and off-hand weapons with W, but each one only has 50 ammo. When a weapon runs out, it’s shuffled to the back of the order, and the use of your W means the order changes throughout the game.

Since Aphelios' abilities are automatically learned, his level-up points are attached to his stats instead. Over the course of the game, players can put points into attack damage, attack speed, and bonus armor penetration. The new champion also comes with a custom HUD, displaying his current weapons, their ammo, and the weapon he swaps to when the next runs out of ammo.

In the video above you can see some Aphelios gameplay from the PBE, courtesy of former Cloud-9 ADC, Sneaky. As you can see, Aphelios is similar to any other League of Legends marksman. The key to success is staying out of trouble while ensuring you’re close enough to do damage to the enemy team. With no self-peel (Aphelios has no movement abilities, and both his crowd-control and healing are highly situational), it’s more important than ever to focus on positioning.

When it comes to items, don't drift too far from traditional marksman builds. That said, there’s a little extra room for tweaking that depending on your favourite weapons. Attack damage is essential, of course: if you’re a fan of the rifle or the pistol, consider attack speed or items to further augment your range, like Runaan’s Hurricane or Rapid Firecannon. If you’d prefer a spellcasting build based around the flamethrower, include an Essence Reaver. For runes, focus on Precision as your primary choice. In champion select, Aphelios is going to benefit from a strong frontline, so consider supports like Alistar, Leona, or Braum. Alternatively, healers like Soraka or utility supports like Lulu are also useful.

Calibrum is good in lane or during sieges, but is much less useful than Infernum when it comes to teamfights. Crescendum is great in skirmishes or 1v1. Keep a weapon that’s useful for the phase of the game in your off-hand as long as possible, and swap to it only when needed to ensure you maximise its effectiveness. Different weapon combinations have divergent strengths and weaknesses, so keep an eye on what you’re holding, what’s coming up, and when you’ll be forced to swap to make sure you’re not caught out by an unexpected change in your arsenal.