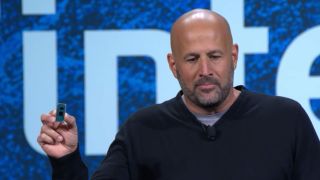 Late last year, Intel held a technology event where it talked about upcoming designs. One of the big advancements Intel discussed is called Foveros, a 3D chip packaging technology that allows Intel to improve performance by packing more chips into a smaller area, with improvements in bandwidth and other elements. Today at CES, Intel showed off the first public demonstrations of its Ice Lake and Sunny Cove architectures.

As far as products go that might be of more interest to PC gamers, Intel announced it will have six new 9th Gen CPUs for desktop—the non-K parts. These run the gamut from Core i3 to Core i9 parts, but we didn't get the exact model names and specs yet. The non-K parts generally come with a boxed cooler sufficient for the task, and while they'll lack overclocking, something like an i9-9900 clocked at up to 4.9GHz (4.6GHz on all cores) would be great to see.

But let's get on with the new stuff.

Intel says that volume production of Ice Lake will begin this year and products will be on shelves by Holiday 2019. We don't have much in the way of specs, but like several of Intel's previous new processes, it will start with U-series ultra low voltage parts. Given the launch window, it sounds like the U-series Ice Lake parts will arrive about the same time as desktop Cannon Lake CPUs finally start showing up in significant volumes.

Intel had working Ice Lake silicon, and ran a comparison of Ice Lake against another thin and light notebook—likely a Coffee Lake-U laptop. The comparison used an AI algorithm to process images and apparently runs 1.5 times faster on Ice Lake. That's probably more of a best-case scenario, but we'll have to wait and see how it performs at the end of the year.

Taking the small chip SoC design even further, Intel's Project Athena and its Lakefield platform are an extremely dense SoC that includes four Atom cores with one larger Sunny Cove core, Gen11 graphics, and uses Foveros to stack DRAM, the CPU and GPU cores, cache, and other IO into a multi-layer solution. The SoC measures 12mm x 12mm, and a complete 'computer' can fit on something about the size of long pack of gum. This will allow for even smaller form factors, but nothing really related to PC gaming right now.

Intel didn't shed any new light on what we can expect from the Gen11 graphics for example, so we don't know if Ice Lake or Lakefield will be more capable of running games or not, but we've previously heard targets of twice the performance of the current Gen9 graphics solutions. [Ed: What's twice as fast as slow?]

There was plenty more shown and discussed by Intel during its event, but much of it is for the datacenter and not really anything that will matter for PC gamers any time soon. For example, Cascade Lake with 48 cores and 96 threads was shown, which could be useful for large MMO servers but otherwise won't matter much for gaming purposes.

Regardless of Cannon Lakes tardiness, the big news for Intel is that it has working 10nm silicon. This was reiterated with several demonstrations, including Ice Lake and Lakefield, as well as a new Snow Ridge platform for 5G deployments. Intel also had an Ice Lake server CPU demonstration running on early silicon—Intel says it got silicon back "literally a few weeks ago."

In other words, Intel knows that its 10nm transition is way behind schedule, and it has received a lot of criticism for the delays and lack of information. But four products using 10nm were shown, implying we'll see true volume production at 10nm soon. It's about time.