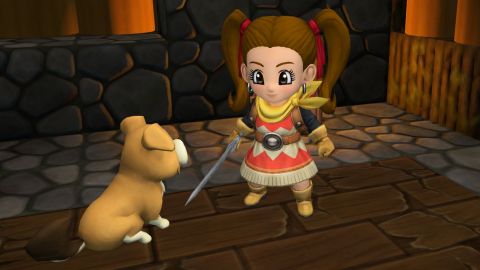 A lighthearted romp, with plenty of opportunities for creative building and a surprisingly good story.

What is it? A creative building RPG
Expect to pay $60/£50
Developer Square Enix
Publisher In-house
Reviewed on GeForce GTX 1070, i7-7700, 16GB RAM
Multiplayer? Up to 4 players
Link Official site

Despite having an entire Island as my playground, to build up and shape how I please, I’m spending a disproportionate amount of time making bathrooms. Washrooms, spas and shared toilets, both fancy and rustic—there’s a lot to choose from and each one makes the citizens of my kingdom literally burst with happiness. I can then spend that happiness to unlock more things to make even more bathrooms. Dragon Quest Builders 2 is as weird as it is delightful and an entirely different beast to the main Dragon Quest RPG series. The world needs saving and there are goofy Slimes to bash, but here you’re more Bob the builder than dashing swordsman.

In this quirky offshoot, you go from building basic bedrooms and kitchens in order to help people survive in dire times, to constructing elaborate castles and giant magical trees all in the name of defeating the evil Children of Hargon. After inheriting a deserted Island off of a hairy mole-thing with a hammer and befriending a chap that likes hitting things a little too much, you start about your task of creating your own kingdom. Doing so requires more people and resources, so off you pop to different Islands, solving the issues there before returning with everything you’ve learned and plenty of materials.

The game is mostly split into two halves. There's your time on the Isle of Awakening where you can do whatever you want, be that creating cities, sculpting blocky statues in your own image, or, in my case, building a multiplex of bathrooms; and your time investigating other islands where you’ll help people out with quests and more specific builds.

The result is a building game with just enough direction to help you make some impressive-looking stuff. The second major Island, for instance, has you build increasingly opulent bars to motivate miners into working. The major plot-integral buildings have blueprints for you to follow, but mostly you’re left to it. A room needs to be at least two blocks high and have a door to be recognised as such, but they can be any size or shape and contain whatever you like.

For most quests you’ll be given a rough recipe—a pot and a towel rail will make a toilet, a chest and some bonfires will make a kitchen—but you can shape them however you please. Experimenting will lead you to unlocking other room types and earn you the gratitude of the people you’re helping. There’s a hell of a lot of block types to keep things fresh so, even if you did decide to build 10 restaurants in a row, there are enough components to keep them all varied. From simple wooden walls and floorboards, to marble buttresses and fancy carpets, there’s a lot to play with. There are even minecarts and track to help you make rollercoasters or transport links if you wish. However you won’t get to make the most of it until after the first major island and your return to the Isle of Awakening, which is a long time to wait to be given more freedom.

There’s also an absolutely massive RPG story here full of peril and plot twists that ties into the original Dragon Quest II on NES. Set 'some time' after the events of the game, the Children of Hargon seek to destroy the world by summoning a demon. Their appetite for destruction is so ravenous that creating anything is considered heresy. That’s where you, the legendary builder, step in to rebuild forgotten settlements and restore peace. It’s full of traditional fantasy fare, but it’s told with humour and some excellently written character dialogue. You never hear a single person speak but, thanks to the way their accents are written, you’ll still vividly hear them in your head.

The port job is fine. There are a few basic graphical options and it runs smoothly, but there’s not much room to customise your experience. The PC version includes all of the console version’s DLC from the offset so you’ll have loads more building options, but you won’t be able to make use of these until you get quite far into the story.

My one complaint is that the pacing gets a little odd sometimes. About halfway through there's a section that you're locked to until you complete it—not being able to switch to the freebuilding of the Isle of Awakening or even the multiplayer. It’s not bad, it’s just a very strange choice when you've previously had so much freedom. Also, the (thankfully brief) stealth section can do one—why is it in a building game?! The endgame also has a fair bit of grinding to do as a lot of block types and items are locked until you spend 'gratitude' to get them. You’ll gather it quite easily by building things for your citizens, but it’s a bit of a slog to get it all.

Calling Dragon Quest Builders 2 a Minecraft clone is a disservice. Yes, they’re both block-based building games, but DQB2’s story gives your building purpose. You might not be able to craft impressive redstone circuitry, but at least the furniture actually looks like something you can use rather than wool, trapdoors and guesswork slapped together. By having so many individual items, DQB2 feels way more polished. It’s also easier to make something that looks good even if you don’t feel particularly creative. There’s always going to be that person who can somehow create entire cities out of perfectly coordinated blocks, but you can happily take pride in your simple square bedrooms and toilets when all of the pieces fit together so nicely.

A lighthearted romp, with plenty of opportunities for creative building and a surprisingly good story.