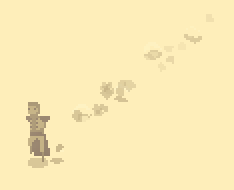 I've just finished Daniel Linssen's latest game, and yeah I am partly saying that out of pride. It wasn't easy: this desert-set wandering title tasks you with reaching a far-off mountain, in a sandstorm that obfuscates your direction, occasionally nicks your stuff, and compels your camel to bugger off every night in search of food.

You'll learn to rely on your footsteps in this $3 indie game, even if the sand does smother them after a while. You'll rely on your compass, which frequently goes missing, and on the flags you can plant to lead your back to your trusty wagon. Along the way you'll find notes that fill in a bit of backstory or offer a bit of help—notes that are tracked on the main menu if you're into that collecting lark. There are also little secret items, of which I've found one—I was more focused on reaching that bloody hill.

It's a short game, once you've beaten it, but it's also very cheap, and I don't think I've played anything quite like it. (I tell a lie: it's a bit like the desert section of SNES classic Secret of Evermore, but more fleshed out.) You can buy Sandstorm here, and check out Linssen's other, mostly free itch.io games over yonder. His puzzle-platformer The Sun and Moon was recently expanded and put on Steam, you'll recall.