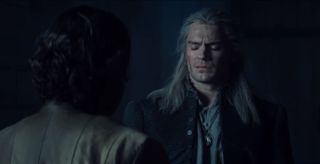 Lauren Hissrich, the showrunner for Netflix's adaptation of the Witcher novels, has been known to reply to fans on Twitter—as well as people who seem not to be fans. Most recently, she was asked about "the reason for race- and genderbending established characters" by someone who had just deployed a bunch of hashtags including "#JewishSupremacy". In spite of that, Hissrich took the time to reply thoughtfully and at length. You can read the whole thing over at Twitter if you want to feel like ripping your eyeballs out, but for everyone else here are some quotes of Hissrich's main points.

"The books are Polish and packed with Slavic spirit. It was important to keep that same tone in our show. With that in mind, I asked around (especially to Polish friends): can the Slavic culture be reduced solely down to skin color? The answer was resounding: god, we hope not.

"The Witcher is REALLY interesting when it comes to depicting racism because it’s about species, not skin color. What makes characters “other” is the shape of their ears, height, etc. In the books, no one pays attention to skin color. In the series... no one does either. Period.

"In terms of casting, we welcomed everyone and anyone to put themselves forward to prove they could embody the character. We saw all ages, all ethnicities, all levels of talent, from movie stars to fans in Poland who’d never acted professionally before. We chose the best actors."

There you have it. As someone who is reading the books right now, what's interesting is that they're about more than just Slavic folklore. Those folk stories and monsters are put in a world that includes everything from a retelling of Beauty and the Beast to a rough analogue of the Holy Roman Empire. The idea that "it's Polish therefore everyone has to be white" seems even more nonsensical given that the stories puts Slavic culture in a world that contains a bit of everything (so many fairytales!) as a way of elevating it, rather than sectioning it off like it needs to be protected and kept "pure".

But if that's what you'd prefer, you can always stick with the 2002 version.