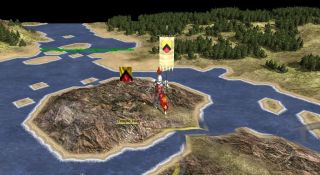 Fantasy universes are great fodder for Total War mods. Lord of the Rings, Game of Thrones, Warcraft—they've all inspired massive total conversions. And with three games, loads of books and a new TV show just about to air, The Witcher is conspicuously absent from the list. That's set to change, however, as The Witcher: Total War is now in development for Medieval 2.

While The Witcher is mostly concerned with the shenanigans of Geralt and Ciri, the books and games are still pretty dense with history, petty kings and armies itching for a fight. The team is starting small, with three factions and a map that encompasses Velen and Novigrad, over which the Nilfgaardian Empire will compete with Redanaia and Novigrad. When that's complete, it will be released as a demo and then grow from there.

Eventually the plan is to have the entire map and 29 playable factions, including non-human factions like The Wild Hunt and Mahakam. Monsters won't show up in battles, though they'll feature in the game, and the Witchers themselves will get to duke it out with regular units, many apparently drawn from Gwent. As you'd expect the Witchers will also have to deal with monsters when they're not off fighting battles.

It's still very early days, however, and at the moment the team is working on the map, modelling the settlements and putting together the UI. "Progress is slow," according to the ModDB page, and it's looking to recruit more people, from artists to voice actors. It might be a while before we get our hands on it, then, so try to make the Netflix show last.