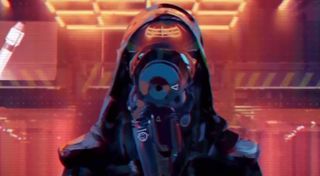 Last week, Gearbox released a Homeworld: Deserts of Kharak story trailer about the discovery of the “Primary Anomaly,” the first small step in the long quest of the Hiigaran people to reclaim their homeworld. Today, a new trailer went out, this one called “The Transmission,” that sets the stage for the inevitable slide into war.

The planet Kharak was riven by centuries of religious warfare that had left it devastated and exhausted by the time Kiith Galsien, formerly one of the dominant Family Houses of the Kushan people, was finally forced into exile. 400 years later, the discovery of the anomaly prompted a coalition of other Kiiths to launch an expedition into the swath of northern desert the Galsien had claimed as their new home, to recover and decode its secrets. Learning of the mission before it began, Kiith Galsien struck first, taking advantage of the technology it had stumbled upon in its wanderings to begin a new war against the heretics.

Homeworld: Desert of Kharak will no doubt fill in a lot of blanks, but the broad strokes of Kharak's history were actually established in the original Homeworld, through the Historical and Technical Briefing section of the instruction manual. I actually find that comforting. The game's the thing, but I'm happier than you might think that retconned or half-assed pre-Homeworld lore isn't being shoehorned in just to justify a new release. I'm also happy that, based on our preview, it looks very much like Deserts of Kharak will be a proper successor to one of the finest RTS games ever made.

Homeworld: Deserts of Kharak comes out on January 20.