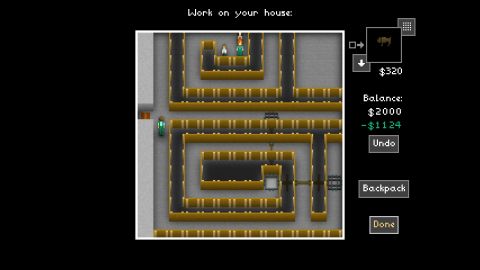 A merciless and thoughtfully-designed online strategy game whose clever systems enable a unique and troubling experience.

I've just left my wife and kids home alone so I can rob one of my neighbors, John Gordon Buffington. I bring a backpack stuffed with tools: some sturdy clubs for smashing windows, a saw to hack through wood paneling, and because my part of town is full of clever and dangerous people, water to short-out the security system and some drugged meat to fling at any guard dogs I run into. I expect I'll have to deal with more than one angry pit bull before I can break into the Buffington vault.

The heist is all I can think about now because I've spent most of my family's meager savings on this gear, leaving my own home defenseless. This type of risk—a riveting gamble, actually—runs through every part of The Castle Doctrine. I feel constantly uncertain, and that's the point.

It's dark when I sneak into the Buffington residence. My nerves buckle with each step into the house's tight hallways, but if I turn and run, I'll be forced to drop all my gear and be left with nothing. I notice some movement to my left. It's one of the Buffington children. As she walks toward me I think I spot a pit bull behind her. Or is it a cat? All I want is to knock the girl unconscious and be on my way. I've broken a few windows, but at this point I've never hit anyone in the game with a club before. As I'm about to find out, there aren't any half-measures in The Castle Doctrine. The girl collapses into a bloody and gruesome heap on the floor.

I take one more step and get exactly what I deserve when her mother Eileen shoots me point-blank with a shotgun.

Jason Rohrer's The Castle Doctrine combines puzzles, stealth, and strategy to create what feels like an endless parade of impossible choices. Do I spend the paltry $2,000 budget that every new character starts with on an elaborate defensive maze to deter criminals, or do I become the criminal and prowl the neighborhood in search of easy marks? It's a question I have to ask each time I start from scratch after frying myself on an electric floor or falling into a pit.

Every new life begins the same way—in an unfurnished 2D box with a wife and two kids and a vault. There's plenty of floor space to lay out interior walls, traps, or elaborate obstacles to keep intruders away from my family and vault. Each home is essentially a giant grid on which players execute turn-based, horizontal and vertical moves. The design system is basic, but is easy to understand and rewards experimentation. Thieves can only break in if I leave or log off, so there's time to think things through.

My wife and kids always wait passively for me to find them a safe place to hide. But there's a catch: they must have a clear route to the exit and I have to be able to reach my own vault without using any burglary tools. I need to be able to solve each puzzle and trap system I invent. Since every death in The Castle Doctrine is permanent, part of the challenge is not building a security system so intricate that it kills me.

I have to prove my knowledge of my own home before I can leave to go prowl around the neighborhood. The penalty for a misstep in the game is extremely harsh, but totally appropriate given the risks I take. It's a dark and fascinating vision of 1990s-era home ownership in a massively-multiplayer world where there are no allies to make and no police to call.

The Castle Doctrine is an MMO in that the episode of thievery and death at the fictitious John Gordon Buffington residence was actually an online encounter with another player. After leaving my house I picked his name from a list showing me how much money he's likely to have on hand and how successful previous burglars have been at ripping him off.

My own house is vulnerable too, and security tapes record any break-in that occurs while I'm away. Playback of these tapes shows the name of the online thief who stopped by as well as how deadly my traps were. And once I begin to understand the logic of Castle Doctrine's collection of tools, electrical switches, and pressure plates, sinister ideas form about the many deadly booby trapping possibilities.

But it's also a system that begs me to take revenge. It's right there on video how a man killed my wife, neutralized my carefully planned security system, and left me penniless. The security tapes exist to constantly provoke me and point me in the direction of other players. The feedback loop created by the tapes is an elegant way to test the trajectory of my own behavior online. I can choose to correct it—or not.

A narrow and deadly world

The two main systems at work in The Castle Doctrine—thieving and home security—are daunting at first. Trial and error is necessary to understand how the burglary tools interact with different defensive traps, and some of the solutions are frustratingly invisible in a world where nearly every mistake means permadeath.

In order to build an effective home security apparatus I was compelled to take some chances and explore what other players, especially the fat cats with the big bank accounts, found so effective. Many of the homes that populate the game can seem almost impenetrable, but Castle Doctrine requires there to be at least one way in. Knowing that every puzzle can be solved is vital—a challenge that beckoned me forward.

By accepting that there is so little permanence at play in The Castle Doctrine, the almost overwhelming sense of uncertainty that pervades it becomes easier—and more satisfying—to cope with. In this way, what The Castle Doctrine offers is a brilliant but horrifying depiction of a risk society at war with itself.

A merciless and thoughtfully-designed online strategy game whose clever systems enable a unique and troubling experience.