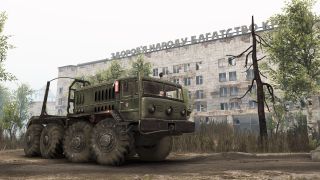 Spintires is a sim so niche it makes Munich Bus Simulator look mainstream. It's a game about navigating old Soviet trucks across muddy, waterlogged terrain, and it's kinda brilliant—a gruelling battle against nature where you try and heave a stubborn lump of metal through the sludge, wheels churning, engine wheezing, belching black smoke into the grey sky. But for someone on the Spintires dev team, this wasn't quite bleak enough. It needed to be bleaker.

Cue the game's recently released Chernobyl DLC, which dumps you in a radiation-poisoned chunk of Ukraine that includes parts of the city of Pripyat, a load of mud trails and forests, and the reactor itself. You play as a logger—one of many who have travelled to the exclusion zone to harvest its wood, according to what I will generously refer to as the DLC's story. Your job is ferrying increasingly precarious stacks of logs from place to place, and that's it.

There isn't a huge amount to do in Spintires. It's a pretty bare-bones game. But what I love about it is how something as simple as driving from A to B can become wonderfully tense and challenging if you encounter a particularly rough stretch of terrain. You have to make use of your differential lock and winch to claw your way out of the mire, without destroying your truck in the process. These little self-contained pockets of drama are what keep me playing.

Your life is made more difficult in the Chernobyl DLC by the inclusion of radiation hotspots. Certain parts of the map are bristling with dangerous radioactive energy, which slowly damages your truck (and its payload) over time, meaning you have to get out of there quick—which is easier said than done when your back wheel has carved into a patch of sloppy mud, spinning hopelessly. The map isn't massive, but feels bigger than it is, purely because getting around the thing is so damn challenging.

'STALKER with trucks' might just sound like a grabby headline, but it really does remind me of it. People trying to eke a living out of a dangerous, inhospitable place, where the environment itself is a hazard. That constant feeling of struggle, of battling the elements. And, on a more superficial level, it just looks a whole lot like STALKER's grimy, overcast vision of the exclusion zone. I would love to see this kind of off-road vehicle simulation in the next STALKER.

Apart from the radiation, however, this is just more Spintires. If you didn't get on with the base game, this won't do much to change your mind. But if you have a weakness for Chernobyl as a setting, and want to experience some of that understated STALKER-like atmosphere in a different context, it might be worth a look. And if you miss the strangely compelling, yet utterly bleak, atmosphere of HBO's recent Chernobyl miniseries, this might scratch a radioactive itch. You can buy the DLC on Steam now for a not great, not terrible $5.