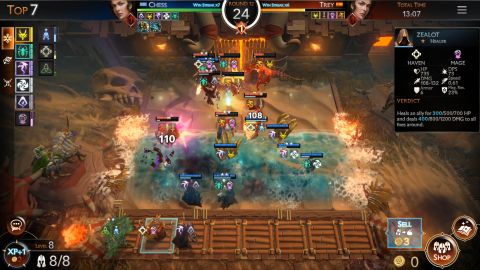 It might seem gimmicky, but Chess Royale is an effective introduction to an often-confusing genre.

On the face of things, this feels like the kind of game that should never have been made, an amalgamation of ideas and franchises that should barely occupy the same publishing house, let alone be drawn together in the same studio. But for all the ways in which Might & Magic: Chess Royale seems like an affront to everything that led to its eventual creation, it’s a refreshingly pared-down take on an emerging genre.

Leaning heavily on the Might & Magic franchise to provide a little extra validity in a genre dominated by Blizzard, Valve, and Riot’s fantasy efforts, Chess Royale places a relatively unambitious autobattler into the vaguest-possible battle royale framework, encouraging 100 players to fight it out for the top spot. It’s an amusing gimmick to add to a new genre, but it does little to change the way players interact with one another—when all the other Auto Chess-inspired games are already last-player-standing affairs, bolting the word ‘royale’ to the end of your title isn’t exactly revolutionary, especially when there isn’t a battle bus or blue circle in sight.

Nevertheless, adding more than 90 new players to the prescribed formula does change things up a little. Rather than a traditional health bar, Chess Royale grants players three lives. The first round is something of a freebie, granting a risk-free opportunity to start building your army, but after that opening battle, every round you lose will cost one life. As players run out of lives, their avatars disappear, the 1 vs 100-style grid that charts progress through each game gradually turning to black as more and more armies are knocked out. It’s a ruthlessly efficient means of thinning the herd—whether it’s a close fight or an absolute rout, you’ll lose the same amount of health—but it also ensures that you won’t spend a frustrating half-hour rolling for the one unit that might turn your fortunes around.

The result is an autobattler that's much faster than its competitors in spite of its bloated player count. If you’re familiar with the genre, much of your actual interaction with other players remains the same. You start out with a couple of low-level units, and place them on a board to automatically duke it out against another players' army. Over time, you gain gold and XP that can be used to acquire new fighters and level up your existing roster, empowering the spells that they use to wipe out their automated opponents.

Other autobattlers feature moments that let you catch your breath, but in Chess Royale, PvE and 'Carousel' rounds are out, as is any sense of an economy—everyone receives the same reward at the end of a battle, with 'survivor' bonuses being granted across the board, and small 'slayer' prizes being awarded to those who eliminate other players from the competition. Building your army is also a much quicker process here than elsewhere. Synergies—collections of units that share similar traits, such as Mages or Assassins—are far easier to establish than in Teamfight Tactics, as there are far fewer to build around. Items are replaced by spells which all players have access to, and which can affect the entire board, rather than specific units.

The UI has clearly been designed with mobile users at its forefront. Buttons for using the store, unlocking spells, and levelling up are particularly prominent, and the lack of fine motor control provided by a mouse has likely contributed to the choice of a very small playing board. Armies are arranged on a 3x8 grid, dramatically capping tactical depth by taking an entire row away from the chess board-style layout that helped give the genre its name. Thanks to the introduction of several powerful units who confer important buffs on their closest allies, many of my most successful games have hinged on my ability to simply huddle all my fighters together in the centre of the board. Some loadouts have required a little more planning, but broadly, once your army is in place, there's little need to move it around, which feels jarring given the ever-evolving strategy of similar games.

The mobile interface also does little to benefit the fantasy realm that underpins Chess Royale. Ubisoft has put the Might & Magic franchise to work in a number of weird and wonderful ways since acquiring it in 2003, but this feels like a particularly low moment. The 35-year-old series comes off like an afterthought here, with major characters limited to static player avatars. Your units themselves are even less inspiring, with names like Vampire, Dryad, and the particularly complimentary Troglodyte. As those units level up, they’re all granted some cosmetic upgrades, but these are so minor that they barely show up during fights. As tie-ins go, it feels pretty cynical, offering next to nothing to either the new game or its source material.

As a response to the hyper-complexity of the MOBAs that spawned it, the relative simplicity of the autobattler as a genre seemed to have achieved all that it needed to. Yet Chess Royale has emerged as a streamlined, fast-paced alternative, each match finishing in half the time I might spend despairing over my Teamfight Tactics line-up. The dalliance with battle royale adds little to the conversation, but the pick-up-and-play approach is a welcome change to a genre that was never really about actually playing anyway.

It might seem gimmicky, but Chess Royale is an effective introduction to an often-confusing genre.