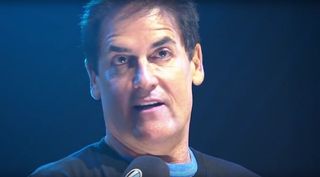 Dallas Mavericks owner Mark Cuban squared off against Intel CEO Brian Krzanich in a bazillionaire League of Legends throwdown over the weekend, which might seem like an odd sort of contest for these particular gentlemen to engage in except that it was for charity: Specifically the Cybersmile Foundation, a non-profit dedicated to combating abuse and bullying online. Unfortunately for Cuban, nobody told him that it was a family-friendly event, and that f-bombs were not allowed.

Cuban's trouble began during an interview prior to the match, when he said that Colin Cowherd, the ESPN announcer who drew gamers' ire earlier this year when he said he'd rather quit his job than cover esports, "is an idiot when it comes to esports." Whilst making the point that LoL "is a real sport," Cuban squeezed in a bit of trash talk about Krzanich, and said that even though he'd only played three games up to that point, he was pretty good at it because, to quote, "I'm fucking smart."

In a post-match interview, Cuban was told that his choice of words violated the rules of the tournament, and that his potty mouth was going to cost him a fine of $15,000. Asked if he wanted to withdraw the statement, Cuban responded bluntly, "fuck it," drawing himself another $15,000 fine.

Now, it's worth bearing in mind a few points. Mark Cuban's net worth is estimated to be around $3 billion, which means that 30 large is the kind of chump-change he can't even be bothered to look for under the couch cushions. And the moment was almost certainly staged: The first f-bomb seemed spontaneous, but it was made quite clear before he uttered the second that the fines were payable entirely to the Cybersmile Foundation—and Cuban clarified the situation by asking, "So if I say it again, I have to pay another $15K?"

The theatrics play into Cuban's real-life persona—as Polygon points out, he's been fined nearly $2 million by the NBA over the years for various sorts of outbursts—but his pro-esports attitude seems legitimate, and the bottom line of a $30,000 donation to a worthwhile charity is pretty great by any measure. And yes, he won the match, which you may enjoy in full here. All in all, I'd say that's not a bad day.