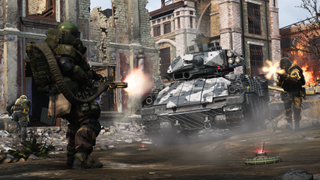 Yesterday's Call of Duty: Modern Warfare story trailer brought action, intrigue, and an unexpected surprise. The Special Operations "Survival mode" teased in the PlayStation 4 version of the trailer will be PS4 exclusive until October 1, 2020. Activision had previously said that "post-launch gameplay content, including new multiplayer maps, new multiplayer modes, special ops missions and more will release simultaneously across all platforms," but the real shock was the length of the exclusivity period. A year is a long wait no matter how you cut it.

Activision hasn't yet responded to my inquiries, but Infinity Ward narrative director Taylor Kurosaki addressed some complaints on Twitter yesterday, saying that Survival mode, "which is a sliver of Spec Ops," is the only exclusive content.

It’s all good. We have tried our best to have an open dialogue with our players from day one. We understand letting that trust down. These are complicated decisions that are above our pay grade. Please know we want what’s best for all our players.September 24, 2019

"We have made many changes this year with the goal to make the entire experience better for all of the Call of Duty community, including no season pass, crossplay across all platforms, and that all post-release maps and modes will be coming to all platforms at the same time. We understand that some may still be disappointed to not be able to play classic Special Ops Survival day one, we hear you. Please know that we are working hard to make sure this is the best Call of Duty we’ve ever made and the best experience possible for fans."

I've reached out again to Activision for comment on the PS4 exclusivity period, and will update if I receive a reply. A closer look at the Call of Duty: Modern Warfare campaign will take place at the end of September, roughly a week before the Special Ops premiere.