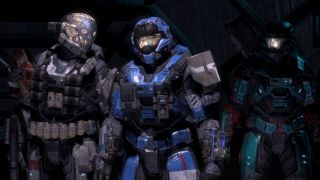 Since Halo: Reach landed by drop pod on PC back in December I've been hankering for one particular missing feature — Forge mode. I spent hours in it as a teenager, piecing together absurdly dangerous gauntlets, which I'd watch my friends run through from afar, laughing darkly with my hands steepled. I was undoubtedly the Jigsaw Killer of my Halo clan. Every group had one, surely?

I intend to take up that role once again when 343 Industries gets Forge mode ready for Halo Reach and the rest of the games yet to be released as part of Halo: The Master Chief Collection. When exactly that will be isn't clear yet, but 343 has at least revealed its progress in the latest development update.

It says that "great progress" has been made on fixing bugs and designing both Forge and Theater mode in a way that suits Halo: Reach. Next up is implementing PC-specific functions that will work for all iterations of Forge and Theater across the rest of the Halo games.

While testing out mouse and keyboard controls on PC, the developer put together a quick scene in Halo: Reach's Forge mode, afterwards sharing what is the first screenshot of a Forge level on PC.

343 notes that the scene in the screenshot uses the legacy budget. When Forge comes to PC it will have an expanded budget, meaning you can place many more objects in a single level than you used to be able to. No one is ready for the number of grav lifts pointed directly at kill balls I am planning.

What 343 isn't ready to talk about yet is how it's implementing the sharing of custom maps and game variants across platforms—so Xbox One and PC. Specifically, it's not ready to reveal the PC implementation of this feature.

Elsewhere in the development update, 343 says it's making good progress on the beta for Halo: Combat Evolved Anniversary, gearing up for a PC test that's been planned for February.

If you can't wait that long then you can jump into the Halo: CE: Anniversary event. Between January 29 and February 5, the 4v4 social playlist will rotate the event, which emulates Halo: Combat Evolved's settings and comes with classic variants of Anniversary maps.