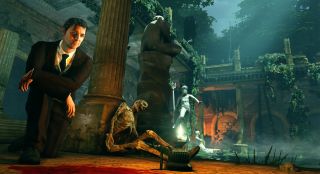 Frogwares, creators of The Sinking City and myriad Sherlock Holmes adventure games, is having some trouble with one of its former publishers, Focus Home Interactive. A license agreement between the pair has ended, and it looks like that means several of the studio's games will be removed from Steam and other stores, against Frogwares wishes.

In a statement sent to PC Gamer and available on the official blog, Frogwares claims that its former publisher won't transfer title IDs to the studio, despite it being the IP owner. Focus can't continue to sell the games, however, so that means they'll vanish. Frogwares is making new store profiles, but that might not be possible in the case of older games on the previous generation of consoles.

Last week, Focus told the developer that it would not be able to transfer content or title IDs because of a new policy that hat been put in place. Frogwares was apparently unaware of the policy and claims that it never appeared in any other contracts.

Two Sherlock Holmes games and Magrunner: Dark Pulse have already been removed on PS3 and Xbox 360, though the PC versions are published by Frogwares already and are thus safe. Unfortunately, that doesn't include the excellent Sherlock Holmes: Crimes and Punishments, which is due to disappear from Steam and consoles on September 29.

"It is possible that it will be taken down at this date or earlier if nothing is done," says Frogwares. "The players will no longer be able to buy and play the game. We will also lose all our Wishlists on those store pages. As the creators and IP owners of all those games, we have no control and no say in this. The decision of Focus Home left us voiceless."

According to the developer, the new policy is a threat to other contracted developers and that it hasn't encountered anything like it before. I reached out to Focus Home Interactive to find out more details about the policy, but they've yet to respond. I'll update this story with more details if I hear back.