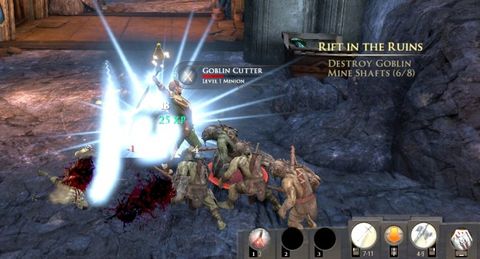 Slow, clunky, and prone to glitchiness, playing Daggerdale feels like a sentence to an actual dungeon.

This quest kicks off with your intrepid hero fleeing from what would, in any other Diablo-style hack 'n' slasher, be an opportunity for an epic boss battle. Instead, your character very nearly wets his chainmail undergarments and teleports into an opening area chock-full of same-y foes and snooze-worthy fetch quests. It's an incredibly apt analogy: whenever excitement and intrigue come calling, Dungeons & Dragons: Daggerdale tucks its tail and runs in the opposite direction.

To the casual observer, an action-RPG slashfest would seem like it'd be hard to screw up—and yet, Daggerdale's a cautionary tale in what happens when you haphazardly dump ingredients into a pot and start stirring. The way my not-so-manly Fighter reluctantly swings his sword in response to my clicks makes the whole thing feel like it takes place in a vat of pancake syrup. Thanks to some incredibly awkward targeting, combat is comparable to playing as a glaucoma-stricken retiree running over enemies in a riding lawn mower.

Without interesting combat, the two other pillars of hack 'n' slash—class progression and questing—wouldn't have had a chance to shine even if they were imaginatively done. Each of the four classes is a bog-standard representation of its corresponding archetype: the Fighter tanks; the Rogue fires arrows; the Wizard quickly gets torn to sparkly, enchanted confetti by hard-hitting foes; and the Cleric supports. In other words, don't expect any of Diablo or Torchlight's crazy hybrids. Four-player co-op makes things a bit more strategic, but the experience is largely unchanged.

Quests, meanwhile, tend to go something like this: “Oh, you're just about ready to do this crazy-epic thing, but first I need you to bring me X number of Y object.” Fine, can I do the fun thing now? Oh, it turns out to be a fight with 10 boring enemies. Worse, most of your time is spent backtracking, and you can only undertake one quest at a time.

Daggerdale might've achieved mediocrity if its lazily ported UI didn't interfere at every opportunity. Console button prompts are everywhere, and it fails to understand the most basic mouse-and-keyboard prompts or the concept of remappable hotkeys. Could it get worse? Yes!

It's got glitches. Glitches everywhere. Enemies regularly get stuck in the ground, armor graphics fail to load, and NPCs have a habit of disappearing without ever having the decency of offering to take me out

of this hell with them.

Which all brings us back to Daggerdale's cowardly main character. He runs in terror from a fight with a giant rock monster, and that's exactly what you should do if confronted by this game.

Slow, clunky, and prone to glitchiness, playing Daggerdale feels like a sentence to an actual dungeon.