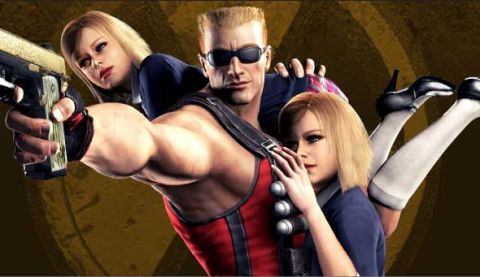 Dont expect a miracle. Duke is still the hero we love, but struggles to keep up with modern times. Crude humor and classic weaponry keep him in the game.

Is it worth the wait? Of course not, don't be ridiculous. How could any game possibly be worth waiting 14 years for, especially one that only ever aspired to be a low-brow comedy first-person shooter? There's no reinvention of the genre here, no real attempt at grandeur. More than anything, Duke just wants to party like it's 1997.

Check unrealistic expectations at the door and forget the ancient, hyperbolic promises of self-deluded developers before you even consider buying this suddenly corporeal ghost of PC gaming history. The development-time-to-awesomeness ratio isn't impressive. If you can do that, Duke Nukem Forever can at least mostly succeed in its aspiration. After all of its tumultuous history, it's ended up as an entertaining FPS wrapped in juvenile, smut-laced humor. Its gameplay is a hybrid of old-school and new, and it won't wow players with stunning visuals—its window of opportunity for that passed years ago—but it does put on a good show of alien ass-kicking by working what it's got.

Like a hyper-violent, over-sexed Peter Pan, Duke Nukem refuses to grow up. Though 12 years have passed since the events of Duke Nukem 3D, he's the exact same trash-talking, cigar-chomping, muscle-bound man of action, still rocking that '90s-style buzz cut and red tanktop. The source of his superhuman action-hero powers is his own ego, which doubles as a literal recharging shield over his (also recharging) health. It's reinforced by an entire world of people who worship him as an infallible man-god and sex idol—women want him, men want to be him. He's the stereotypical teenage boy's power fantasy personified and turned up to 11. Sure, he's a ham-fisted action hero parody, but Duke remains one of the most memorable characters in gaming history for a reason: he's simply more fun to play as than SERIOUS FACE ARMY MAN.

As two-dimensional as Duke himself, the story gets right to the point: intergalactic sex-criminal aliens are re-offending, and Duke must defy orders and step in to defend Earth's chicks. Even that flimsy B-movie tribute plot is resolved (sort of) half way through—DNF becomes simply about shooting aliens 'cause they're ugly, and bits of the script are little more than profane Mad Libs. Lazy writing or pointed critique of the state of story in first-person shooters? I prefer to think of it as the latter.

Action-wise, the single-player game fulfills its obligations as a successor to Duke Nukem 3D. It's fast-paced run-and-gun battle against diverse, love-to-hate 'em monsters, using weaponry ranging from conventional boomsticks toover-the-top sci-fi, and fought through a long series of corridor levels where there's almost always something unique to see and interact with. Almost every original weapon (except Duke's boot) returns—and after taking the Shrink Ray and Freeze Beam for a spin, it makes me wonder why few shooters have appropriated the joy of killing enemies in two-step attacks. Sure, shrinking enemies and then squashing them or freezing and shattering isn't as efficient as double-tapping to the head, but it's more fun. There's also the Devastator, a ridiculously powerful, double-barreled, rapid-fire rocket launcher that never pauses to reload until it's spent.

Duke's trusty pistol, shotgun, Ripper chaingun, and rocket launcher may not be anything particularly unique or special (and certainly not realistic, lacking even a hint of recoil) but they're loud and potent alien killers. The new weapons, a rail gun sniper rifle, an alien laser, and a triple-missile-launcher called the Enforcer Gun are pretty ho-hum—no new classics here. The biggest sadness is that DNF has adopted the Halo-style two-weapon system, which frequently forced me to abandon my beloved Shrink Ray for lack of ammo. Even with all of that heavy weaponry, I still died quite a bit—despite the regenerating health system, Duke Nukem Forever is one of the more challen­ging shooters I've played in years.

At least the signature remote-detonating pipe bombs, laser tripwire mines, and Holo-Duke decoys (plus melee-enhancing steroids and pain-mitigating beer powerups) exist outside this limitation, allowing you to set all manner of devious traps in the diverse range of linear, corridor-style levels and lure enemies into them. Duke battles the aliens through his high-tech Duke Cave, his self-styled opulent casino, the aliens' disgustingly organic hive (complete with Prey-style sphincter doors that open when tickled), a Vegas skyscraper, a Dukeburger restaurant, Hoover Dam, construction sites, Nevada canyons, underwater, and more.

Oh yeah, and there's a shameless strip club level with no combat—it's mostly a showcase for boobs and a playground for the many interactive games (pinball, air hockey, billiards, video poker) and gross-out moments in the bathroom. No two settings are alike, and with plenty of Easter eggs scattered around that boost your health when interacted with, exploring the world is a frequently rewarding high point.

Blast from the past

At the end of these levels lie some old-school-tough boss battles. Almost all of the hulking beasts took me out at least once before I figured out and exploited their attack patterns (notable exception: the final boss). Fights against a mothership, a massive alien queen, an underwater leech, and others are more about the spectacle of fighting huge unique monsters (plus an excuse for Duke to nut-punch something for an ego boost) than creating interesting gameplay.

The old-style design is probably due to the fact that DNF should've come out years ago. (Hell, 2K's recommended PC is built from five-year-old hardware.) Here and there, it shows; while alien monsters look pretty cool—particularly the iconic Pig Cops and flying, tentacled Octabrains—humans and many of the environments look well behind the curve. But thanks to the aliens' comical massacre of EDF (Earth Defense Force) troops, you don't spend a lot of time looking at people, so it only really offends when the incompetent President waves his unarticulated fingers in your face.

Pop culture references are similarly out-of-date—even growing moldy. Considering that the freshest ones I caught date back all the way to 2004's Team America: World Police (excluding reenactment of Christian Bale's 2009 meltdown in the opening and a crack at Call of Duty 4: Modern Warfare tacked on at the end), most of Duke's one-liners were probably recorded in the early half of last decade. Though Duke still delivers several chuckles per level by quoting '90s films like Pulp Fiction and Starship Troopers and jabbing at Halo, it's noticeable that he's been living under a rock for quite some time.

I encountered a lot more puzzles (of the jumping, physics, and switch-throwing varieties) than I'd expected, and few are befitting of Duke. Dropping barrels into one end of a shipping container to tilt it and create a ramp is too mundane a task for a super badass—Duke's not making fun of the puzzles other shooters started using a decade ago here, he's imitating them. Poorly.

The more innovative puzzle gimmick is shrinking Duke down to a few inches tall and sending you scurrying through levels made for man-sized play. Being action-figure sized gives you a new and interesting perspective on the world—jumping around a vast kitchen battling rats and mini Pig Cops among the shelves while using mustard jars as cover is a very different experience, and one encounter in particular makes an epic battle of what would normally be a one-shot kill. However, running any significant distance on tiny legs can get tedious.

Action is also varied up with frequent turret-shooting scenes, most of which are thankfully short and punchy, and two separate driving sequences: one as mini-Duke in an RC car, one in an oversized monster truck. Both are longer than they probably should be, as the uncharacteristic lack of guns on Duke's cars limits you to repeatedly running over enemies and turbo-boosting over jump after jump.

One category in which DNF has surpassed its predecessor by leaps and bounds is in its uncensored nudity, particularly in the first half. Breasts abound, some attached to shapely but dead-eyed ladies, some to other, less appealing things. If that kind of thing bothers you, you've probably already been warned away by the long-as-your-arm ESRB rap sheet—but my personal taste threshold was exceeded only once, by a mid-game incident that goes just a little too far in mixing boobs, comedy, and gore.

Other points of pain are the checkpoint-only save system, which is at least courteous enough to only rarely respawn me farther from the point of death than I'd have liked, and mercifully brief quick-time events—mostly just tapping Space bar for feats of strength.

DNF is a throwback to the age when shooters were long single-player experiences first and multiplayer games second, and as such the eight-player multiplayer modes aren't going to challenge Call of Duty or Battlefield for the competitive crown. It's often hilariously effective at showing us a good time, though—the 10 maps, which are diversely designed with the same wide range of locations as the campaign, are built to create goofy and memorable moments when combined with Duke's weapons. Moments like shrinking and squishing a guy carrying a babe-shaped flag back to his team's base, or hitting a jetpacking enemy with the Freeze Ray, causing him to fall to the ground and shatter. And those laser tripwire mines? Hilarity ensues.

There's a persistent character progression system, but fortunately (in my opinion) leveling up only unlocks cosmetic items to make your Duke avatar distinct with silly hats, shirts, and glasses and not weapons and perks. Bonus: it supports Unreal Tournament-style mutators, such as the classic rail gun insta-gib.

Checking “flying a jetpack” off the list (in multiplayer only, sadly) meant that the reasons I loved Duke when I was 16 are all present and accounted for in DNF. They're no longer new, and I'm not 16 anymore, but the combination of nostalgia and juvenile humor can still crack me up.

It's a healthy chunk of game, too. The Steam clock read “10 hours played” when I'd finished the single-player run on normal difficulty, and that's without devoting time to posting a high score on the pinball machine or conducting a thorough search for secrets. Completing the game unlocks classic, why-doesn't-anyone-do-this-anymore cheats like character head scaling, and I might have to replay at least part of it just to see that absurdity in action.

I'm sure that years of anticipation will spoil Duke Nukem Forever for some—there's no getting around that at the end of that long road is only a good game and not an amazing one. It is what it is. He may not be at the top of his game, but even after all this time, Duke still knows how to party.

Dont expect a miracle. Duke is still the hero we love, but struggles to keep up with modern times. Crude humor and classic weaponry keep him in the game.