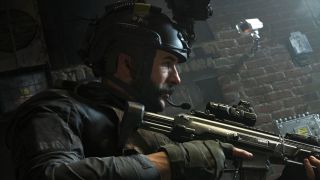 There's been a deadly terrorist bombing at London's Piccadilly Circus. The perpetrators have been tracked to a four-story townhouse in North London, and three teams of British Special Forces prepare to infiltrate the building in the dead of night. It will be a room-by-room, floor-by-floor search and kill mission. The SAS are not there to make arrests, and they're not there to subdue or detain suspects. With the exception of one target, the terrorist cell's leader known as The Wolf who is presumed to be at the townhouse, all other suspects are to be eliminated.

At a presentation in Los Angeles earlier this month, I got to watch (but unfortunately not play) this mission from the singleplayer campaign (yes, it has one!) of Call of Duty: Modern Warfare. Members of developer Infinity Ward laid out a few reasons there isn't a 4 after the title, and why they wanted a "re-imagining" of Modern Warfare rather than a sequel. Their goal was to create a game that feels relevant and "ripped from the headlines", and that's pretty hard to do when the storylines of previous Modern Warfare games have veered so far from reality.

"In those games, by the time Modern Warfare 3 was over, nukes had gone off in the world, the Russians had invaded the United States, and so there were really no stakes remaining in that world," said Infinity Ward's Narrative Director Taylor Kurosaki. "So, what we did was we took that storyline and we put it to bed, and we said let's keep all the good stuff, all the stuff you expect from a Modern Warfare game and let's transpose it into today's world."

The SAS mission we watch is a tense affair as the soldiers—including Captain John Price, who appeared in the original Modern Warfare games—creep into the townhouse, position themselves in the narrow hallways, and listen to muffled voices through the building's thin walls. Night-vision goggles are switched on, doors are breached, lights are killed, and suspects are snuffed in a cold and efficient manner with silenced weapons. The sequence is disturbingly reminiscent of some of those leaked military videos you might have seen floating around on the internet.

The soldiers have been briefed that the townhouse may also include noncombatants, which requires some quick decision-making. Most suspects are spotted with weapons and some have time to fire back, but a few others are unarmed and even pretend to surrender before suddenly grabbing for a nearby weapon. The only true noncombatant appears to be a woman holding a crying infant on one of the upper floors: everyone else is hostile. One woman even claims she was being held there against her will before suddenly lunging for a detonator. She's shot dead. The Wolf, the only enemy worth taking alive, has naturally escaped, if he was ever even there at all.

That's the small slice of the Tier One operator missions I saw, a tense and methodical engagement in close-quarters combat. It was exciting and felt realistic (with the exception of the player picking up a shotgun off the floor and deciding to use it instead of the weapon he brought on the mission, which seems risky and unlikely in a real-world scenario). But we also got a look at another mission, a much stranger and more off-putting sequence featuring an entirely different kind of combatant.

In Modern Warfare, you don't spend the entire singleplayer campaign playing as a professional soldier kitted out with expensive gear and access to the best in modern combat technology. You also play as a 'rebel freedom fighter', which presents you with different challenges in combat.

What we saw, though, wasn't quite that. The mission takes place twenty years prior to the terrorist attack in London, when a young girl who is maybe six or seven years old is dug out of the rubble after a bombing in the Middle East. This is Farah, who will grow up to be the rebel leader you play in Modern Warfare, but this is her origin story, and it's a rather familiar one. Her town bombed by military forces and her parents killed in front of her, she's a traumatized child grows up looking for vengeance. I assumed it was an American bomb that destroyed Farah's town and buried her in rubble, as that would certainly be relevant and "ripped from the headlines" even twenty years ago. But no, the bombers were part of some sort of Russian military outfit, and in addition to murdering citizens they're also abducting children.

With her father dead, Farah and her young brother hide in their house from a heavily armed hulking Russian soldier, and rather than fleeing they decide to attack him. The mission looked to me like a tutorial to teach players how stealth works, and little Farah creeps around the house, picks up a screwdriver, and impales the Russian with it. Then she hides again while the Russian pulls the screwdriver out of his body, leaves it on the floor, and continues to search for her. Farah crawls under furniture and through a hole in the walls, retrieves the screwdriver, and stabs him again. This repeats three or four times, until Farah and her brother eventually kill the soldier and then, in true videogame form, immediately attempt to loot his body. What, no teabagging? It is, quite honestly, a bizarre sequence, and an odd choice to attempt to tell a compelling origin story while also teaching stealth screwdriver attacks and looting mechanics.

Farah and her brother eventually stealth their way out of town and reach a farm, where they find a gun and prepare to take on more Russian soldiers. Again, these are, like, little kids we're talking about. Just hide, kids! You don't need to put on a grade-school version of Red Dawn.

"This is the most authentic and realistic game we've ever made," Jacob Minkoff told us during the presentation. I don't personally find two little kids killing an enormous Russian grunt with a screwdriver particularly realistic, and rather than being ripped from the headlines, Farah's origin story instead appears to be ripped from about fifty different movies and TV shows.

At least there's more impressive weapons than screwdrivers in Modern Warfare. As always, a great deal of attention has been paid to making the guns feel realistic, weighty, and fun to shoot. Even the tiniest details like idle animations and reloads have been reworked—you can now see yourself perform a 'tactical reload', which is when you've fired a few shots and your magazine isn't empty but you want to replace it with a fresh one. Rather than your hand simply pulling out the mag, going offscreen, and returning to pop in a fresh mag, you'll actually see your soldier visibly keep the first mag in his hand while replacing with the second. It's a small detail, but an excellent one. And good news, you can now reload while you're aiming down the sights without the gun pulling back to hip-fire position. So now you can keep your target in ADS even while you're reloading. That's very cool.

The audio is excellent, too, though admittedly we were watching the presentation in a theater setting and not listening over a headset like most of us will when the game is released. But the finer details of the audio are again impressive, even when it comes to expelled shell casings, which actually make different sounds depending on what sort of surface they land on. The audio even uses ray tracing to deliver realistic sounds, reverb, and echoes depending on your position in the environment. So as you're running and gunning you'll hear different sounds as determined by your placement in the geometry.

Call of Duty: Modern Warfare is scheduled for release on October 25, and once again on PC it'll be exclusively available on Battle.net. It plans to support cross-platform play at launch and won't have a season pass this time.

Again, we didn't get any hands-on time with Call of Duty: Modern Warfare's singleplayer campaign, as this was just a presentation and only provided a brief look at two missions. But in keeping with Call of Duty's long history, the reimagined Modern Warfare is looking technically impressive and narratively wobbly. When Infinity Ward says it's going for an authentic and realistic game, I'm more inclined to think they're talking about the authenticity of its gun models and sound effects and animations rather than the content of the story. We're sure to find out more at E3 in a couple of weeks.