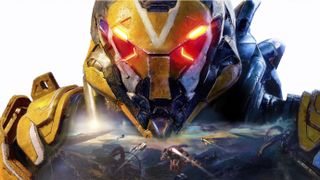 PC gamers are no strangers to an epic comeback story. In the past few years, publishers like Ubisoft and Square Enix have pulled games back from the brink of doom several times. Rainbow Six Siege, Final Fantasy 14—hell, people forget that even Steam was once reviled as useless software that relied on DRM and game exclusives to get people to download it, and now people are mad when a game isn't on Steam. The world of PC gaming is full of stories like these, of developers righting a wayward ship to find resounding, unlikely success. But I don't think Anthem is going to be one of them.

When Anthem launched players quickly realized that, underneath all that hype about an ever-evolving story and world, it was a disjointed, unimaginative loot shooter full of needless padding and repetitive missions. But there was also a glimmer of hope. Anthem wasn't the first live-service game to launch in a bad state, and though things were grim, other games like Diablo 3 and Battlefield 4 had skirted similar launch disasters. But nothing in the past four months since Anthem's release—including its long-awaited and over-promised Cataclysm endgame—has given me any confidence in BioWare's ability to turn things around.

Though Anthem's problems at launch were significant, they also didn't feel impossible to rectify. The main campaign was a total bust, but Destiny proved that players are quick to forgive a bad campaign or patch when what follows is actually enjoyable. But aside from fixes to problems that should never have existed in the first place, like unbearably long load times or a game flow that forced you to spend so much wasted time walking the streets of the purgatory that is Fort Tarsis, BioWare hasn't delivered a single compelling reason to keep playing Anthem.

A new Stronghold and some tweaks to loot haven't come close to fixing Anthem's foundational issues. For months, players begged BioWare to throw open the dam of its drip-fed gear grind—just to give them something to be excited about—and BioWare hasn't, presumably so as not to undermine and trivialize Anthem's gear progression. All the while, notable BioWare developers have been pulling back, engaging with the community less, leaving players in the dark about what was happening and why.

It's understandable that BioWare employees don't want to subject themselves to the toxicity and vitriol often thrown their way. It also puts Anthem in vicious cycle it can't escape from: The longer BioWare gives players the silent treatment, the more disgruntled and upset they become.

Without something to push back against this overwhelming tide of negativity, I can't see Anthem ever making a comeback. Even if such a fabled update existed—that perfect game mode or progression grind that could suddenly make Anthem fun—I don't even have faith that BioWare is capable of making it.

In the tumultuous months that followed its release, one beacon of hope was Anthem's Cataclysm event. Since E3 2018, BioWare teased this as the cornerstone of Anthem's endgame experience: Apocalyptic, supernatural storms that players would have to brave in order to save the world and, of course, grab some good loot in the process. If BioWare could do something fun and interesting with Cataclysm, it might have been able to finally get its footing. But, like everything else about Anthem, Cataclysm is a baffling disappointment.

When Cataclysm was first shown, hurricane-strength winds ravaged the land, uprooting trees and rocks while wildlife fled in terror before earth-shaking peels of lightning. It looked scary and exciting. The version of Catacylsm now available on Anthem's test servers couldn't be more different.

In lieu of an announcement at E3, BioWare revealed their plans for Catacylsm during a livestream a few weeks ago. After weeks of waiting and hoping BioWare would have something to show, we got some nails and a coffin. Instead of that supernatural storm we were promised, players fly around in a map that looks exactly like the main open world only it's colored really blue for some reason. There are no hurricane winds, no bolts of lightning, nothing to indicate that you're navigating a fatal storm to fight some unknowable threat.

Nope. Cataclysm is just Anthem's Free-Play mode with a timer slapped on. You're still flying around to different objective markers on the map, solving some arbitrary puzzle or fighting some meaningless boss—only now there's a scoreboard. I took some time to play Cataclysm on Anthem's test servers in hopes I was maybe missing something, but it's really as boring as it sounds.

Though Catacylsm is subject to change (and hopefully improve), it echoes the same problems plaguing the rest of Anthem: It's unimaginative and underwhelming, making me believe that BioWare just doesn't have what it takes to make Anthem fun.

In four months BioWare has only managed to address some of Anthem's most broken designs, but we're still left with a shooter that is woefully boring and sparse. Cataclysm isn't going to change that. If BioWare really wants to save Anthem, it needs to give up on its half-assed post-launch roadmap, start over from scratch, and build something actually worth saving. Instead of drip-feeding updates to its rapidly evaporating community, BioWare should go dark like Hello Games did after No Man's Sky and resurface when it has something of interest. But if BioWare continues chasing milestones on a road map that few people even care about anymore, Anthem is truly doomed.