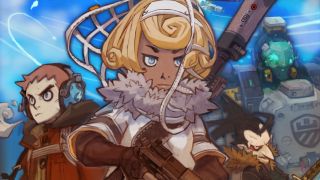 Tiny Metal: Full Metal Rumble director Hiroaki Yura didn't start our interview by talking about the new features being added to his sequel, which builds on the obviously-Advance-Wars-inspired Tiny Metal released in 2017. We got to those soon enough. But first, he mentioned the Syrian refugee crisis.

I've interviewed a lot of people about a lot of videogames, and the real-world horrors of millions of Syrians being displaced from their country since 2011 had, up to this point, never come up. Tiny Metal: Full Metal Rumble is not trying to be a deep commentary on world events, but it does focus on a character whose people have found themselves without a country. The story starts with Wolfram, a mercenary from the first game who's on the hunt for her lost brother while also trying to take care of her "boat people," another refugee reference to the Vietnam war.

"We had the setting for Wolfram from the beginning of the first game," Yura said. "All this stuff going on in Syria, people being displaced from their homes, we decided to have a character who works as a mercenary for other countries, which is kind of ironic, because they've been forced out of their [own country]. They work as mercenaries and go back to their big fleet of ships, these huge tankers. Everybody lives there. Instead of the immigrants going to other countries to get help, they go to the boats and live in a huge armada. Wolfram's mercenaries fight for other countries, get the money, and feed their people."

There's a personal story in there as well, about Wolfram hunting down her lost brother. It's all presented in a colorful, cartoony style that I imagine is usually more silly than serious. But still, I appreciate the ambition.

I spoke with Yura in June, about a month before Tiny Metal: Full Metal Rumble finished development. It hit Steam on July 11 to mostly positive reviews, and since 2017 his team has been working on features that fans (and critics) of the first game said they wanted.

Full Metal Rumble introduces fuel and ammo systems, which were absent in the first game. "I was very much against it, but we had too much community feedback that they want fuel and ammo," Yura said. "I wanted a fast-paced, simple game, but I was convinced that what the community wanted was another dimension where they have to figure out the logistics of making sure you don't run out of ammo and fuel. So we decided to put that in."

That'll come into major play with a new unit, mechs, who can traipse over mountain tiles with no movement penalties, but consume more fuel as a result. Also new: commander units on the battlefield, which he likens to controlling Raynor in StarCraft. And you'll now have Advance Wars-style commander powers, including passive skills and special abilities unique to each character.

"We do feel we are the spiritual successor to Advance Wars," Yura said of the obvious comparison (they embrace it in their own trailers, even). But he says, despite obviously following in the footsteps of Nintendo's strategy series, Tiny Metal contains "tremendous fundamental differences."

"Advance Wars never had facings. We have flanking, and that means if you attack from the side or from behind you do way more damage. We thought that was pretty big. Another two things we've added: Famicom Wars only had one type of attack, which is... attack. But we have 'assault' where we can push an enemy out of a tile, and focus fire, where multiple units can fire at once using the lock and focus fire mechanics. So that's very different to what Advance Wars had."

On top of its campaign, Full Metal Rumble has online multiplayer. Outside of a few criticisms of the PC keybindings on Steam, consensus seems to be it's a strong step up from its predecessor. And at $15 it's cheaper, too.