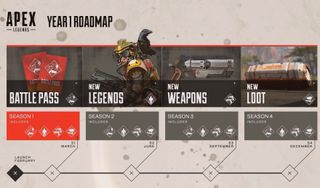 Respawn's Titanfall-universe battle royale released the same day it was announced in February of this year. Since then, the Apex Legends developer has promised a year full of new Legends and weapons. Apex Legends' roadmap for its first year is a high level look at how Respawn plans to update the game over the course of 2019. For a more granular look at every Apex patch so far, we routinely update our list of the latest Apex Legends updates.

Four Battle Passes will launch throughout 2019: in March, June, September and December. During each of these months, new Legends (playable characters), weapons and loot will also be added.

The Battle Pass looks fairly similar to Fortnite's equivalent. "The Battle Pass is a seasonal system that rewards players with exclusive cosmetic items," reads the Apex Legends FAQ. "These rewards are a mix of exclusive seasonal cosmetics and Apex Packs. Every player can unlock some of these items each season through normal play; those who choose to purchase the Battle Pass can earn everything available that season, around 100 different rewards."

Importantly, new Apex legends won't be doled out as part of the Battle Pass: the pass is all about cosmetic items and Apex Packs. Legends will arrive alongside each season of Apex.

Apex Legends' first seasonal battle pass, Wild Frontier, launched on March 19th and we suspect will run through June 17th. There are two tracks to the Battle Pass, a free and paid tier. The free tier gives players one Wild Frontier skin, five Apex Packs, and 18 Wild Frontier stat trackers, assuming you meet the level they're unlocked at. For a full list of unlocks at each level, check out everything we know about Apex Legends Battle Pass for Wild Frontier.

You can buy the season 1 battle pass for 950 Apex Coins ($10), while the Battle Pass Bundle will shoot you right to level 25 for 2800 Apex Coins ($30). Individual levels can be bought outright, all the way to the max 100th level, for 150 Apex Coins each. If you reach level 97 by playing, though, you'll have earned enough Apex Coins to recoup the cost of the battle pass, essentially setting yourself up to get the next one for free.

Apex's first new Legend, Octane, released during Season 1, though he is not part of the content drip you'll work through in the Battle Pass. This movement-based Legend has an activated ability that trades health for speed while his Ultimate ability places a jump pad on the ground that can be used for mobility or to gain tactical high ground. Here's the full list of Octane's abilities. Although Octane is now available, he costs 12,000 Legend Tokens or 750 Apex Coins and is not included with purchase of the battle pass.

Season 2 of the Battle Pass will arrive after a limited-time event Legendary Hunt kicking off on June 4th. Season 2 will include a number of changes from Wild Frontier, including the way that progression through levels works.

Respawn is adding Daily and Weekly Challenges to its Season 2 Battle Pass, which it says should give some variation from game-to-game. In addition, challenges won't expire, meaning that players who start the season late or take days off won't miss out on that experience. They'll still be able to chew through all the available challenges. Respawn said the time to reach level 100 on the Season 2 pass "should be significantly reduced."

New Legendary items have been added, and the premium rewards track will serve up a new Legendary every 25 levels, beginning with the first—so at levels 1, 25, 50, 75, and 100. Badges and stat trackers are being removed from the premium path (win trackers will remain earnable in the first ten levels of the free path, so everyone can earn them easily) in favor of three new categories of content, but Pass owners will still get a seasonal badge that will evolve, rather than taking up additional reward slots. Voice line rewards are also being dropped in favor of more crafting materials, to ensure that players will be able to earn enough to craft a Legendary item of their choice.

Thanks to the work of dataminer Shrugtal  we also know about a future legend named Wattson who may release as part of season 2's battle pass. While Octane in Season 1 was heavily movement-based we think Wattson will probably show off a different style of reactive gameplay. Here's everything we know (and suspect) so far about Wattson's abilities.

More information about the Season 2 Battle Pass will be revealed at 10 am PT/1 pm ET on June 8 during the EA Play event, which we'll have for you here as part of our E3 coverage.