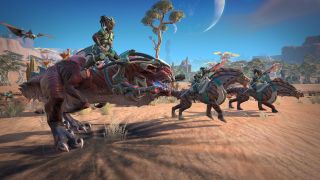 Picking a faction in a 4X game like Age of Wonders: Planetfall usually requires a lot of consideration. You'll be stuck with them for ages, after all. But this time, with access to four of the factions for four hours, I didn't even have to think about it. My options were restricted to Space Dwarves, Space Bugs, Space Americans or a group of stoic warrior women with an environmentalist streak who ride laser-packing dinosaurs. Was there really any choice?

The Amazons are clearly the best, but I'm probably not giving the rest a fair shake. Every faction has unique units, techs and a playstyle that makes them all pretty tempting. The insectoid Kir'Ko, for instance, have a penchant for psychic trickery, taking over minds during the turn-based tactical battles. But: laser dinosaurs!

My army of nature-loving warriors was led by Sappho Tori, a premade character that I tweaked only a little bit, providing her a dinosaur mount straight away. Named characters like Sappho are special heroic units that lead armies, annex territory and influence battles with powerful abilities. When they level up, new skills can be unlocked, letting you transform them into a legendary sniper or giving them the ability to drive a massive tank.

Before I could send out this mighty army of Amazons and stampeding dinosaurs, I still had one more faction-defining decision to make: what secret technology was I going to pick? These special projects dole out flashy abilities that can be used in combat and on the map, as well as giving you a new path to victory by letting you construct a doomsday weapon. I went with the biological nightmare that is the xenoplague, which, I would quickly discover, is really gross.

In Planetfall, years of isolation have ended and the various human, post-human and alien factions of the universe are once again travelling across space, settling on forgotten worlds and competing over territory. Despite the stellar setting, Planetfall is not a space 4X, as each game takes place on a single, randomly generated world. Sappho and her pals landed in an appropriately green sector of the planet, surrounded by alien flora.

The map is a real treat. It's a randomly-generated jigsaw full of sectors with meandering borders and special traits that nevertheless fit together very neatly. The result, at least using the default map settings, is a world that's got diversions and shiny distractions at every turn, egging you on to explore further, but still manages to look coherent. Within a short march from my colony, I found a mighty river of magma, a dead city spread out across an entire sector and even a civilisation of intelligent fungi. But each sector still conformed to certain rules, making them feel like part of a larger, thematically consistent region.

It didn't take me long to get into trouble. As well as the other factions to contend with, marauding aliens wander the map in search of fights. Like any good tourist, I was heading over to the aforementioned river of magma to soak in the sights, but I was waylaid by a group of angry plants before I could get there.

Fights take place on a separate tactical map informed by the sector you're in, so I found myself in a dense jungle—the enemy's home turf. Age of Wonder 3's tactical maps were more like conventional medieval battlefields, broad and flat, but Planetfall's are much more elaborate and put a greater emphasis on cover and line of sight. There's still more than a hint of the older games' combat systems, but the sci-fi conceit and abundance of firearms means that, at times, it's equally evocative of squad-based tactics games like XCOM, though fights are much shorter.

Even with dinosaurs, it pays to take a step back and assess the enemy. I absolutely did not do that, but it's still a great idea. Enemies have various resistances and weaknesses, all handy things to know if you're planning on killing them. Quite a few of my units had more than one ability, thankfully, giving my army a bit of flexibility straight away. If an enemy was weak against melee attacks, I could send my pterodactyl in with its claws. If they were weak against fire, it could shoot them with lasers instead.

Operations really saved my bacon. These replace Age of Wonders 3's spells and function pretty similarly. You research new operations and then cast them in battle or on the campaign map, buffing units and colonies while harming enemies. I was rather partial to the good old orbital laser, but my alien plague came in pretty handy, too. It poisons enemies and spawns a horrible little parasite who can join your army after the battle. In only a handful of turns, I already had several fun super weapons to play around with.

For reaching the magma river and surviving a few battles—just—I rewarded my army with an upgrade. Every unit can be augmented with mods, giving them new characteristics and abilities, like a jetpack that makes the unit more mobile in combat. Thanks to the xenoplague secret technology, I was able to research plague pods, giving my units the ability to lob toxic projectiles at enemies. Leaders can be enhanced even more with weapons, gear and mounts. For my basic rangers, it was an obvious upgrade, but the mod system appears to be as much about specialising, not just making your units better.

Planetfall seems to have hit the sweet spot when it comes to unit customisation. Instead of making lots of tiny, incremental tweaks, you're adding a small number of mods that can significantly change the unit. It's hard to get excited about a 2 percent damage boost, but the ability to fly and a new weapon with lots handy effects? That's a bit more exciting.

As well as exploring, I was expanding my borders. Expansion in Planetfall is methodical, and instead of growing your borders through influence or culture, you annex sectors, specialising them for things like industry and agriculture and then exploiting what you find there via your colony. A higher population and additional colonies let you control more sectors and increase your reach. With the Amazon Empire growing, it was inevitable that I'd bump into one of the other factions that had made the world its home.

I'd already met the Growth, a plant-based NPC faction. Marauding plants might have beaten me up a few times, but the Growth was actually very friendly. NPC factions are indigenous and aren't competing in the 4X competition. You can wipe them out if you're feeling particularly cruel, but since the Amazons seemed pretty in tune with nature, I opted to help, instead. NPC factions dole out quests, rewarding you with resources and favour. The latter fuels diplomacy and can be spent on demands, like asking an NPC faction to leave a sector so you can take it over, or buying unique units and mods. In the Growth's fungal city, I purchased some bees, as you do.

This way, you're not locked into your faction's army. Through diplomacy and trade, you can field whatever you want. And if you prefer to fight, you can always go and conquer a settlement and use their buildings to make new troops, helpfully shoring up any gaps in your own faction's roster. I only bought those bees, however, and while they were very good bees, they weren't exactly game-changers. Good mascots, though.

Diplomacy between playable factions is pretty familiar. You make pacts, deals and trade via a diplomacy screen. They're a chatty bunch, always eager to give you a call with an update on your relationship status. If only this happened in reality. "Hey mate, just wanted to let you know that we're still work acquaintances." With all the wandering packs of aliens looking for a fight, I didn't feel like adding a war on top of that, so our relationship stayed pretty friendly. With more time and colliding borders, I'm sure that would have changed.

With time for one last adventure, I bid farewell to the safety of the land and headed out to sea. Just like the land, the seas of Planetfall are made up of sectors that can be annexed and exploited, and I was warned that leviathans dwelled there. My battle-hardened Amazons were ready for a tough fight. Things are a bit different at sea. There's no cover, unfortunately, and land units have to fight on boats. The sea beasties absolutely battered us, even as we rained down death with toxic arrows, bombs and orbital strikes. I probably should have waited one more turn to for my sea unit to finish being recruited. We prevailed, though! And so the Amazon Empire finally expanded into the sea.

I encountered a few visual bugs, and parts of the UI are sorely lacking clarity, but Age of Wonders: Planetfall otherwise makes a very good first impression. Like its predecessor, a lot of the systems serve to prop up the engaging tactical brawls, but it's a broader 4X with more attention given to the empire management and diplomatic side of things. Notably, this doesn't seem to have a negative effect on the pace, at least in the early stage of the game, which moves along briskly despite all the additional distractions.

Age of Wonders: Planetfall is due out on August 6.