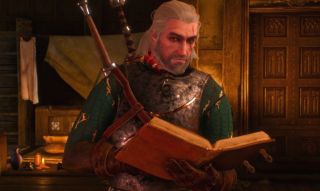 The joy of The Witcher 3 isn't just in its winding story and sweeping landscapes—it's also in the little details, some so small that you might not even notice them on your first playthrough. Considering the size of the open world, you almost certainly will miss most of them. The Continent is full of incidental animations and unexpected interactions, of NPCs behaviour that makes the world feel alive, and subtle in-jokes that will only make sense to seasoned monster hunters.

We couldn't collect all of them in one space, but here are 30 of our favourites. Go looking for them, the next time you mount up Roach and take Geralt out for a quest. And who knows? Maybe some will even show up in the Witcher Netflix series. And if you're looking for an absurdly detailed list of secrets in The Witcher 3, check out Andreas Schmiedhofer's mammoth guide to hidden quests and locations.

1. You can stumble on the grave of Leo, a relatively minor character from The Witcher 1

"A senseless death, could've been avoided."

2. The drunk barber in Novigrad will sometimes give you the wrong haircut

You can protest, but you won't get your money back.

3. The raindrops on your Quen shield

Who needs an umbrella?

4. Your horse, Roach, will seek food and water

If you dismount your faithful companion to visit an inn, or chat to townsfolk, Roach will ensure he's sufficiently fed and watered by seeking out food troughs. If you're lucky, you might see the town drunk join him.

You'll need to be a contortionist to copy him.

6. NPCs will cough, sneeze and hiccup

Better out than in...

8. NPCs seek shelter from the rain

When it starts spitting, some NPCs will run for cover. You'll also see children playing in puddles.

9. You can find Yen's crystal skull at the start of the game

It's the one from the opening cutscene—find it and give it to her for some unique dialogue. One to remember at the start of your next playthrough.

Hey, you said count, and they counted.

11. Geralt lifts his scabbard when sheathing his sword

There are tons of incidental animations during combat, too: Watch out for Geralt twirling his sword in his hand between strikes.

...most of the time. Rather than just fly in a given direction, flocks of birds will swoop and flow realistically. It's wonderful to watch.

It's not just for opening doors.

14. Geralt's Blue Stripes tattoo will carry over from The Witcher 2

In The Witcher 2's Hung Over quest you can wake up, naked and dazed after a heavy drinking session, with a tattoo on your neck. If you keep it, and import your save for The Witcher 3, the tattoo will remain—a constant reminder of a wild night.

15. The sun rises earlier the further north you go

And it's beautiful wherever you are.

16. Geralt's face gets veinier the more potions he drinks

Potions are toxic, and the more you drink, the more purple Geralt's face becomes. If you don't like the effect, here's a mod for you.

Poor Eyvind has been waiting his whole life for a glimpse of a legendary White Whale. Shame you had to show up…

In The Witcher 3, windows are actually windows: you can look through them to see what's going on outside. It's a small detail, but it makes the world feel more coherent.

19. You can actually control the weather

A few shrines hidden across the world let you change the weather with a prayer. The Hemdall shrines can make it storm, snow, or clear up in an instant.

20. A dwarf crime boss sits on pillows to make himself taller

Cleaver, a fearsome gang leader, can't quite see over the table without them.

21. You can spot figures in the hills of the Skellige archipelago

Presumably inspired by English hill figures. Keep an eye out for them.

22. Geralt's staring contest with a cat

23. This bench, where couples go for romantic dates

Looking over Crane Cape, this spot is one of the most romantic in Novigrad—as the changing musical score will indicate. Each time you return, you can expect to see a different couple canoodling.

24. The scholar who teaches you Gwent will indeed be killed for his boots

Aldert Geert, in the White Orchard inn, basically acts as your tutorial for Gwent. But he's an ambitious scholar in his own right, and tells Geralt how he wants to document war from the front lines. Geralt warns Aldert that he'll be killed for his boots—and sure enough, later on you find Aldert strung up from a tree, feet bare, a journal beneath him.

The secret best relationship in the Witcher series.

Just look at those ripples.

28. The Witcher 3's ecosystem reacts to your actions

It's fairly minimal, but it's there. If you kill wolves, deer will flourish—if you murder deer, the wolves won't have anything to eat, so they’ll leave the area. Monsters and NPCs will interact with each other from time-to-time, too.

For some fights, such as battling the students in the Defender of the Faith quest, if you keep your sword in its scabbard then your enemies will do the same. You'll still punch each other's lights out—but at least nobody's losing a limb.

During the King's Gambit quest, former queen of Skellige Birna Bran can be (depending on your choices) sentenced to death, "chained to a rock to perish of hunger and thirst, and seafowl will peck apart your remains." In most RPGs, that'd be that—but if you go hunting, you can actually find Birna's Body, chained to a rock as prescribed.