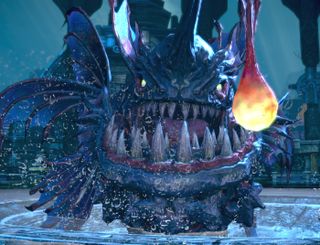 Fate of Arun, the first major expansion to the En Masse MMO Tera, is now live. The free update increases the character level cap to 65, adds new class skills, zones, and dungeons, and "quality of life" improvements that simplify and streamline gameplay.

The less-poetically-named "Patch 29.03.02" notes serve up a detailed look at the changes in the expansion, but the highlight has to be the addition of a new continent, Val Oriyn, described as "a land of savage jungles, colossal ruins, and the undiscovered homeland of the barakas," that's been cut off from the rest of Arun for hundreds of years. It offers four new zones for players level 60-65, the new baraka city of Highwatch, the Vanguard Initiative reputation faction, and new story quests for each zone and the city.

The Coliseum Battleground sounds interesting as well: It's a competitive PvE environment in which two teams race to be the first to defeat waves of enemies. There are also a number of new dungeons and crafting recipes, the enchanting system has been simplified, unused crystals can now be fused into more powerful crystals, and players can now teleport directly to dungeon entrances and turn in quests from any location.

Speaking of Tera, Associate Producer Tina Zhang-Powell recently took some time to show us her rig, and her cat, both of which are pretty cool. You can check them out right here.