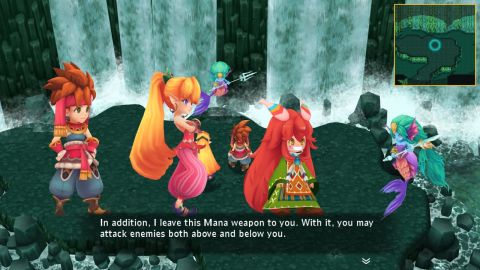 A flimsy remake of a flawed 16-bit favourite that exacerbates all the original’s problems while failing to recapture its strengths.

On paper, it’s easy to see why a remake of Secret of Mana might be an appealing idea. It’s regarded as a classic, yet doesn’t quite deserve to be: its recent reappearance on Nintendo’s SNES Classic Mini opened many eyes to its flaws, even if the fantastic sprite art and lively soundtrack could be appreciated afresh. This, then, represents a second chance: an opportunity to bring a well-loved RPG to a new audience while addressing its weaker elements. So it’s particularly galling to discover that not only does this version fix precisely none of the original’s problems, it goes a step further by introducing several more of its own. It looks worse, sounds worse and plays worse; it is, all in all, a catastrophic misjudgment.

It feels like a cut-price effort from the very beginning. The story hasn’t changed: it follows a mop-haired boy named Randi who, alongside irascible young woman Primm and cheerful sprite Popoi, must re-energise a mythical sword and stop a powerful empire from resurrecting a deadly battleship. But now the story sequences are fully voiced and animated, and they’re profoundly irritating. The performances waver between overly shrill and strangely flat, and the characters’ mouths don’t move when they talk, as if everyone is training in ventriloquy. Any charm to the original storytelling is lost during these scenes, and the additional skits at rest stops quickly become so tiresome and pointless that you’ll be glad of the option to skip past every line.

Still, these are the least of this remake’s problems. Back in the early '90s, Secret of Mana’s combat was one of many strings to its bow: a blend of the real-time immediacy of Zelda with the tactical nuances of Square’s turn-based RPGs. It steadily increased in depth as its enemies grew tougher: no longer able to rely entirely on melee strikes, you’d have to dip into menus to add various buffs, or to launch direct elemental attacks on opponents, as you amassed a catalogue of spells. And, of course, you could rope in two friends for three-player co-op sessions. Much of that is still true here—the three-player option might just be its saving grace—but everything is much clumsier.

For starters, the ability to aim in any direction makes combat considerably less precise than before. You’ll miss more often with ranged weapons, and even whiff the odd thrust of your sword or spear, because you weren’t quite lined up perfectly. And since enemies can also now aim in every direction, dodging incoming attacks is an inexact science. Secret of Mana is still quite an easy game in the main, but there are sequences where the challenge suddenly spikes: essentially, any areas with opponents who use projectile attacks can see your other two party members wiped out quickly, forcing you to invest in revives. Your teammates’ hopeless AI and pathfinding hardly helps matters—these are not new problems, but they’re more annoying than ever thanks to the added challenge of combat.

It gets worse when magic comes into play. The original’s ring menus were unintuitive and poorly explained, but grew to feel more natural over time. Here, instead of encircling the appropriate character, they expand across the whole screen. As such, the only visual clue to whose menu you’re rifling through is the colour of the cursor—which obviously becomes a problem in the heat of battle. Even more bafflingly, there’s no cursor memory, so casting the same spell repeatedly means going through the whole rigmarole again instead of just pressing a couple of buttons. You can, at least, bind two weapons or spells to the bumpers for quick selection, but given the range of options that seems miserly in the extreme, not least with other buttons going unused. All of this might seem like no big deal, but it’s symptomatic of the lack of care that’s gone into this remake.

That extends to the visual treatment. The polygonal models are adequate but bland, losing much of the character of the 2D originals. In combat, there isn’t the same sense of cut-and-thrust: the animations lack energy, the physical connection somehow diminished. Elsewhere, it just looks slapdash. Characters regularly clip through one another, in a manner that looks particularly cheap in a 3D game—especially when engaging NPCs in conversation, which briefly causes the central trio to merge into one. And the less said about the updated soundtrack the better—save for the fact that these headache-inducing remixes will have you glad of the option to revert to the original music.

The shambolic feel continues with a number of glitches, large and small. Two of the biggest ones I encountered broke the game entirely. The first saw Randi inexplicably start hovering above the ground in the Haunted Forest until I entered a warp point, which caused Popoi and Primm to do nothing during subsequent combat encounters, forcing a restart. In the next, Randi lost all his HP but somehow remained alive—still, while immortality was a boon, it left me unable to open any menus.

All of which makes Mana’s already sluggish early stages almost interminable. Nothing has been done to alleviate the repetition or backtracking, as you flit back and forth between the same areas, slowly grinding out spell and weapon experience. It improves by the middle act, as you settle into its rhythms and the map opens up a little, though it’s hard to imagine many players having the patience to get that far.

On which note, it’s hard to know exactly who this remake is for. Those who loved the original and are ready for a nostalgia trip are particularly poorly served by a game that loses much of the SNES game’s offbeat charm and has nothing to replace it with. And anyone who didn’t play it beforehand will wonder what the fuss was all about. About the best I can say for the new Secret of Mana is that it makes the old one, for all its faults, look like a masterpiece by comparison. I suspect that’s not quite the result Square Enix was going for.

A flimsy remake of a flawed 16-bit favourite that exacerbates all the original’s problems while failing to recapture its strengths.