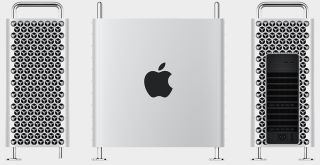 Apple has begun taking orders for its new Mac Pro workstation starting at $5,999, and as we noted in June, the baseline configuration only comes with 256GB of solid state storage. It's an extra $400 if you want to jump to the next tier, which is 1TB. I did one better, though—I ticked every available upgrade option and watched the price tag balloon to $53,247.98.

That includes nearly $500 in software (Final Cut Pro X and Logic Pro X), and if omitting those, the price drops to a more manageable $52,748. And by more manageable, I mean it's like deciding against the optional fire extinguisher when configuring a Lamborghini Aventador to save a few bucks.

So, what exactly do you get when going full-on balla configuring a Mac Pro? The short answer is copious hardware. More specifically, however, here's a rundown of the goods:

Opting for wheels adds $400 to the tally, but c'mon, if you're spending north of fifty grand, you might as splurge, right? Right!?

This type of configuration is well outside the zone of gaming, at least when it comes to playing games. For developers, however, this is a beastly system with a monstrous price tag to match.

Incidentally, you're looking at king's ransom for this level of hardware whether you buy a Mac Pro or, say, a Dell. To wit, I configured a similar setup on Dell's website, starting with a Precision 7920 tower workstation, and came to more than $60,000 (and no wheels).

Suffice to say, if you're in the market for the best gaming PC for your budget, steer clear of workstations.