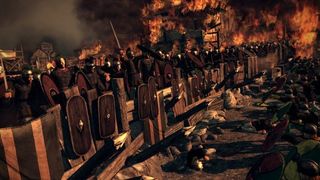 I've been known to get into it with fellow history nerd Fraser Brown over the issue of Rome. You see, Western academia has often come to the conclusion that Rome was good. I, as a wise person who loves freedom, believe they were actually very bad. So when games like Total War: Attila allow me to bring my barbarian armies screaming out of the mists to burn the grand city to the ground, I always relish the opportunity.

What did Rome really do for us, anyway? Roads? Everyone hates roads. Think about it: how much time do you spend on the road angry? No roads, no road rage. Latin vocabulary? Yeah, "television" is fine, but do you know what they call it in Germany? A fernseher! We could all have "farseers" in our living rooms today instead of "televisions", If it weren’t for the dang Roman Empire! How badass would that be?

Plumbing? Okay, I'll give them that one.

So any time I start up a campaign of any strategy game set in Roman times, regardless of the goals presented to me by the developers, my main objective is to light the entire city on fire and dance in the ashes. Sometimes I might take my Visigothic horde on a detour to Northern Spain first to establish a territorial kingdom. You can't sack a great city on an empty stomach, after all, and I hear Galicia is nice this time of the Migration Period. Sometimes I'll skip all that fuss and start as the Huns, riding my horsebound hordes right up to Rome's doorstep and asking if they have some time to talk about our warlord and savior, Attila.

Regardless, sooner or later, I either starve the city out, send ladders over its walls, or knock down its gates and storm into the streets to take vengeance for historical crimes both real and imagined that the descendants of Remus and Romulus perpetrated upon the ancient world. Markets are trampled. Columns are smashed. Busts are toppled. The plumbing and sewage systems… we'll leave those up. That was actually a pretty good idea.

Then, after the battle end screen tells me how much havoc I've caused, I have to look out my window and remember that I’m still living in a world where Rome won. A single tear rolls down my face and onto my period-accurate Gaulish warrior garb. I can't change the past for real. Not yet, anyway. But as long as they keep making games where I can simulate my vengeance, I will happily pick up the blade once again.