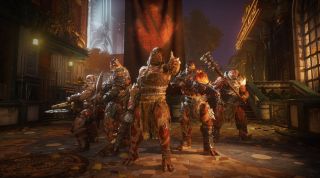 The Coalition is trying a new form of versus multiplayer in Gears 5's Arcade mode. It's basically normal deathmatch with a hero shooter twist. Each hero character has unique loadouts that specialize in different play styles. But Gears 5 players won't have every new hero automatically unlocked—they have to be earned in-game or bought with premium "Iron" currency.

In an interview with Gamespot, multiplayer design director Ryan Cleven broke down Gears 5's monetary structure, which ditches random loot boxes in favor of a more transparent marketplace. "The new structure is built to respect player choice: earnable items are not purchasable, purchasable items are not earnable, and free items are only free. The player always knows what they get if they are earning or purchasing content," he said.

Though, there's one notable exception to this set up—heroes. "As new Hero characters impact gameplay, they will be both earnable and purchasable to players to maintain an equal playing field." This is essentially the Rainbow Six Siege model, where players can grind the in-game Renown currency to eventually afford a new character or purchase them with premium R6 Credits.

The system works fine in Siege, though it can be frustrating to only have a few character choices when you first start playing. It seems like Gears 5 is going for a smaller pool of overall characters, but more will be added over time. Gears 5 heroes are also usable in Horde mode and the new co-op Escape. Different heroes might prove more useful in PvE than PvP.

The Coalition is banking a lot on the idea that players will pick and choose the cosmetics and heroes they want to buy. I'm most curious what the balance looks like between time needed to unlock heroes naturally and how much Iron they'll cost.