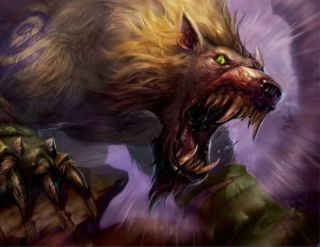 The first time I ever played Hearthstone’s Arena mode, back during the open beta, I was lucky enough to draft Force of Nature and Savage Roar. The 9-mana 14+ damage combo impressed me so much that I crafted Force of Nature before saving up for any Legendaries.

I took to the constructed ladder with a homebrew deck based around that combo, and a few months later made my first legend climb with it. Fast forward two years and five card expansions, and that same powerful Druid combo remains a mainstay of top level competitive Hearthstone—much to the annoyance of some players.

Recent Twitter conversations between Hearthstone developer August Dean Ayala and several pros make me think that Blizzard may be considering a change to the infamous Druid combo. Have Force of Nature and Savage Roar outstayed their welcome? In this article I’m going to weigh the pros and cons of nerfing the combo.

During time off from his career as a composer, Shevek has established himself in the Hearthstone semi-pro scene by writing a weekly strategy column for Team Archon. He's a caster and player for RudeHouse Gaming, streaming here. Follow him on Twitter.

Combo Druid has been a top competitive deck for most of Hearthstone’s history, but barring a few brief periods it has never been oppressively dominant in the way that the Buzzard-Unleash Hunter or Undertaker Zoo decks were. The power generated by a Druid curving perfectly into the combo is offset by the inconsistency of the class if it draws the wrong cards at the wrong time, which can often result in Force of Nature or Savage Roar sitting dead in hand for the entire game.

For a long time, Druid was regarded as one of the most balanced classes, but as others have grown in power over the course of card expansions (hello, Paladin), Druid decks have basically stayed the same, which makes it hard to objectively argue that combo Druid is overpowered. Perhaps one of the reasons losing to combo Druid feels so bad is that there aren’t many other ways for the class to kill you. So the sense of it being too strong is actually a sort of confirmation bias caused by the lack of variety. You feel like the combo is OP largely because Druid games tend to end with it.

It keeps the meta in check

Many otherwise hard to counter strategies are weak to combo Druid, including Freeze Mage, Control Warrior, Face Hunter, and some of the slower Warlocks builds. Druid helps keep in check extreme strategies that, if they became hugely popular, would stifle entire categories of decks. Druid is part of an equilibrium where, for example, if people play Freeze Mage and Face Hunter to counter the popularity of Zoo, then Druid feeds off Freeze Mage and Face Hunter, but since Druid is weak to Zoo, this again creates an environment hospitable to Zoo—and so the cycle continues. Druid might not be everyone’s favorite deck, but it’s a necessary part of a balanced meta.

It’s not really any less fun to lose to

Burst combos are a common source of frustration, because the only counterplay is to stay far enough ahead to avoid the damage killing you. If that isn’t possible, the game comes down to whether the burst deck has drawn its combo. Players complain that taking a lot of damage from hand was the reason Blizzard nerfed Leeroy Jenkins, but the truth is losing is never fun. Players hate losing to fatigue, they hate losing to aggro, and they hate losing to curve-based board control decks. Why should losing to burst damage be treated as a special case by Blizzard?

It teaches players to plan ahead

Advanced players love to hate on “unskilled decks,” but Hearthstone needs a few relatively simple competitive decks to help intermediate players learn the game’s subtleties. Combo Druid fits that niche nicely, because it forces players to predict what might be in their opponent’s hand—a skill neglected by new players, but which is vital at higher level play. While a more complex deck like Oil Rogue can assemble lethal via endless permutations of different combo pieces, Force of Nature-Savage Roar is simple enough that inexperienced players are able to successfully play around it by controlling what’s on the board and managing their life total accordingly. Of course plenty of times you’ll still lose, but the point is you learn how to play around all sorts of potential threats.

Everyone is bored of it

Combo Druid deck lists have barely changed in the last three card sets, and it wasn’t exactly rocket science to substitute Piloted Shredder for Chillwind Yeti anyway. Non-combo styles of Druid barely see any play, because including at least one copy of the combo is almost always better. Nobody is excited about Druid decks anymore, and that should be reason enough for the combo to die. Experience shows that new cards aren’t going to stop Druid players using the combo, (if ‘Beast Druid’ ever happens, you can bet it’ll still run the combo), so maybe it’s time for Blizzard to step in and make a drastic change to freshen the class up.

The combo is deeply intertwined with the design of the Druid class because of how ramp cards work. Wild Growth and Darnassus Aspirant only provide an advantage until turn 9, so any strategy that relies on those cards is much stronger if it can use them to win while that advantage is still in effect. Otherwise, you give your opponent time to potentially erase the early advantage of the extra mana. By providing a turn 9 finisher, the combo is the natural counterpart to the mechanic of gaining extra mana.

Mana ramp is also the indirect reason that Druid deck lists have become so standardized. Cards like Wild Growth and Innervate provide a mana advantage at the expense of card advantage, so they work best when used to play extremely high value minions, each of which may trade for multiple of the opponent’s cards. Decks that use mana ramp to play many low value minions risk running out of steam—even “aggro” Druid runs plenty of high value cards like Piloted Shredder, Druid of the Claw, and Dr. Boom.

To make mana ramp work in Druid, Blizzard initially printed very high value class cards. The problem is that after two years of expansions, they still can’t risk printing any cards that are likely to supplant Ancient of Lore, Keeper of the Grove, or Swipe without introducing massive power creep. Take a look over the past few expansions and you’ll barely find any new Druid cards seeing regular play. Even Darnassus Aspirant is being cut from a lot of lists because Wild Growth often remains the better option.

With all of the above in mind, the biggest reason to change the combo isn’t salt from players who keep losing to it. The real problem is actually Druid’s reliance on mana ramp, which logically leads to decks that play the highest-value minions possible and look to finish with the combo. Mana ramp is what’s strangling variety in the class, and though there’s clearly a case for nerfing the combo to free up the design of Druid cards in the future, I can’t help wonder if Wild Growth is the real culprit.