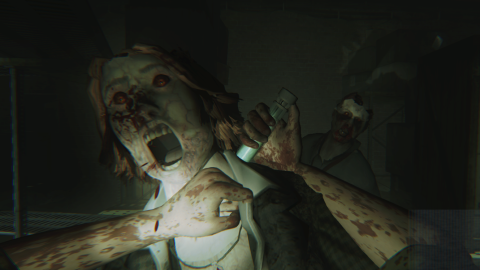 If you close your eyes and imagine what a PC port of a Ubisoft Wii U game from 2012 is like, I suspect you'll hit pretty close to the mark. Zombi looks a bit dated, the controls are a tad cumbersome, there are extremely limited video and sound options, and there are a number of bugs and broken features. It's a damn shame, too, because buried under the rubble of this lackluster port is a spooky, startling, challenging, and often highly enjoyable survival horror game.

Zombi takes place in an undead-infested London, and after stumbling into the safehouse of a man who calls himself Prepper you begin undertaking various missions for him, and later, perform tasks for other characters with their own agendas. You'll visit a number of locations during these linear missions, including a zombie-infested Buckingham Palace, and as you reach these areas they become open-world, meaning you can revisit them later. With only a small backpack to carry what you find, you'll constantly have to make tough choices about what scavenged weapons and supplies to take or leave behind as your progress through the story missions.

Zombified Londoners are no joke. While a lone zombie isn't much of a threat, putting it down is still hard work. Just as smashing a head open with a cricket bat in real life isn't easy (I imagine, anyway), so it is in Zombi, and I found myself mentally grunting as much as my character vocally grunted, as we smashed and smashed and smashed until that zombie head finally burst. When you're swarmed by several zeds it can be a harrowing, almost exhausting experience. If a zombie lands a swipe, kiss a big chunk of your health goodbye, and if they get their teeth on you, you're finished. It often takes several shots from pistols, rifles, and crossbows to put down a shambler, even with headshots, and ammo is precious and needs to saved for the most dire of circumstances. This results in a lot of cautious exploration, tons of tension, bouts of panic, and careful planning, all of which is essential for an effective survival horror.

A wonderful aspect of Zombi is that when you die, you begin back at the safehouse playing as a different survivor, but the character who just died is still out in the world along with your collected weapons and supplies. Head there with your new character and you'll find your old body, shambling around zombified, and get to beat its brains in and take back your loot. (If you die before you can recover your gear, though, it's gone forever.) The different survivors you play don't speak but you do absorb a little of their personalities: some gasp in horror or panic as they split open heads, some roar with rage, and one—my favorite—occasionally erupts in nervous, horrified laughter while pummeling zombies into pulp. It's a nice little touch to make you feel as if you really are playing a different person every time you lose someone.

Tragically undoing all this solid zombie business is a mess of bugs and broken features. For example, you have a radar that can pinpoint nearby zombies on your minimap, except when it utterly decides not to. I initially thought this was purposeful, so the game could give you some extra jump scares, but the radar failed to detect threats so often I think it's just a busted bit of code. Your backpack is also intermittently broken. You access it in real-time, which should make for some excellent, tense rummaging as zombies bear down on you, but sometimes it just doesn't work properly. Mouse-clicking items sometimes selects items, but other times it simply doesn't, forcing you to switch to navigating the slots with WASD. This makes the backpack a frustrating item to use, especially when a few extra seconds can mean death.

Compounding this, you have to use your backpack more often than you should. If it's full, and you find shells for the gun in your hand, you have to open your pack, drop an item to free up a slot, shoulder your pack, pick up the shells (which puts them in the open slot in your pack), then load the gun to free up that slot, and then re-pick up the item you just dropped—all instead of simply loading the bullets directly into the gun with your free hand. Also, opening doors, climbing ladders, vaulting obstacles, crouching under things, and looting bodies are all accomplished with the same key, which is problematic when, say, there's a body lying next to a ladder or in a crawlspace and tapping the key triggers an action you didn't want. Zombi's physics are also occasionally wonky: there's a melee shove, but sometimes it sends zombies or bodies flying like ping pong balls, often through solid walls where you can't loot them.

There are also character-killing glitches. I once became trapped inside a tiny armory that required a keycard to open, which I didn't have, which makes me wonder how I even got inside in the first place. I looted the armory, but with no escape I decided to kill myself with a landmine and start as a new character, hoping I could locate the key and collect my gear. I couldn't, because as I found out several lives later, the key is only available during an official mission to enter that armory, and once inside I found the crates were empty since I'd looted (and lost) everything already. Another time, unplugging my analog headphones resulted in an instant crash to desktop, and upon reloading I found my character gone. And, there was the time my survivor fell through some stairs, through the map, and into the void, losing his life and all that gear.

Visually, Zombi's models are crude, the animation isn't great, and it has an overly muddy and bland color scheme, but the levels are generally well-designed and the environments and set dressing are detailed and evocative. Except for a choice of resolution, brightness, and FOV, there are no advanced video settings to speak of, and all of the audio—SFX, ambiance, music, voice—is tied to a single volume slider. That's too bad, because the sound design is excellent, but I occasionally had a hard time hearing voices over my speakers (it seemed fine through my headphones).

I really wish I could recommend Zombi on PC, because it's a fun and scary survival horror game, but being killed by zombies should happen more frequently than being killed by glitches.

Oh good. A helicopter. Nothing bad ever happened to someone after they got into a helicopter.

A special syringe can kill a zombie with one little shot.

Lure 'em over with a flare, and then it's time for a cocktail.