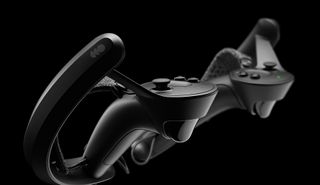 Valve's Index Controllers have a lot of sensors. The second half of its new Valve Index VR system, each controller uses a whopping 87 sensors, including optical, motion, capacitive and force sensors. All the better to detect what each of your fingers is doing, letting you pick up and drop objects, throw things around or even just squeeze without needing to press any buttons (and a play to claim the best VR headset crown).

According to Valve, not only does the finger tracking promise to increase immersion, it also opens up more ways for players to communicate non-verbally in multiplayer. I like the sound of that especially. I don't want to talk to people, but it would be very handy to be able to make more subtle gestures. And not just rude ones. It'll be interesting to see if they're precise enough for sign language users.

With the dynamic sensor and pad assignment, finger tracking can be adjusted for different hand sizes, and Valve says the controllers have been designed for long-term comfort. Even the strap looks incredibly comfy. It's adjustable and uses anti-microbial tech fabric, which apparently means that they're more durable and less likely to get smelly if you sweat all over them after leaping around your living room for three hours. You could even stretch it to seven hours, as that's how long a charge should last.

Valve's not yet unveiled the roster of new VR games that will be able to take advantage of their potential, so it's a good thing they're backwards compatible. As well as the sensors, they've got a track button, thumbsticks, triggers and everything else required for VR games with more traditional control schemes. The controllers will also work with first and second generation base stations, just like the headset, as well as the HTC Vive.

They sound very promising, though the cost means you're going to want to be pretty certain you'll get plenty of use out of them. The Index Controllers will set you back $279/£259 for a pair, or you can get them in a bundle with the headset for $999/£919.