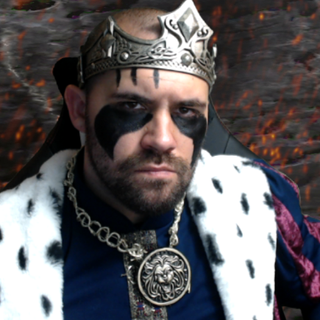 In the past year, you may have stumbled upon Facebook Gaming livestream of a grown man in a crown and war paint plays games like Call of Duty or Fortnite. When live, he is known as Kingslayer, and has been on the rise ever since joining the platform.

Kingslayer didn’t start out as a top streamer. He didn’t even start out on Facebook Gaming. His first shot at game streaming was on Twitch, where he jumped online to livestream some long gaming sessions with almost no viewers. He eventually started up a YouTube channel, where he learned what did and didn’t work for audiences, but he still didn’t see much traction there either.

Even though Kingslayer was confident that he had what it took in terms of gaming skill, he felt he was looking at an uphill battle on the streaming platforms. In spite of the large number of viewers on each platform, it was hard to get noticed.

At the time, Kingslayer had a masters in business and worked a corporate job with a six-figure salary, benefits, and a 401k. He was raising three kids with his wife, and by most accounts his life was good. But, the work didn’t leave him satisfied or provide a sense of fulfillment. So, he turned to Facebook Gaming with his Kingslayer persona. He wanted to create a channel for viewers that felt like a show they could regularly tune in to.

From its beginning, Facebook has been about building a global community. Facebook Gaming’s platform for creators and viewers continues the emphasis on community, and Kingslayer found out just how big a difference that could make.

He started live streaming in his Kingslayer persona, wearing a crown and war paint — things he said people weren’t used to seeing a grown man do. The community response was clear. Within about a month, he’d already garnered his first 10,000 followers. Seeing this growth, he wanted to keep going and joined the Facebook Gaming Level Up Program. Level Up is designed to help content creators who are just starting out on the platform by giving those who qualify access to tools, beta features, and also lets streamers tap into a network of 700 million gamers on Facebook.

Now, just about a year after he started streaming on Facebook, he’s managed to amass over 230,000 followers and is comfortably supporting his family on just his income while streaming around 40 hours a week to his community.

Kingslayer says it’s not just his in-game talent or persona that got him this far. Beyond delivering good, unique content, he believes the biggest key to streaming is going back to where it all starts: community. He believes engaging with followers and viewers is the best way to grow and foster that community. He’s often responding to comments from viewers during lulls in the games.

And, the Facebook Gaming community is constantly growing. There are 100 million users active in gaming-related groups on Facebook and tens of thousands of creators creating content on the platform.

While Facebook’s Level Up program is available to help new creators get acquainted with the platform and find their footing, Kingslayer also recommends believing in yourself. “You can’t care what anyone thinks of you. A lot of people can be demoralizing and troll you. If you want to do it, do it. Do what makes you happy and don’t conform.” Kingslayer found his passion and the community found him, and the Facebook Gaming platform has plenty of room for more content creators to do the same.