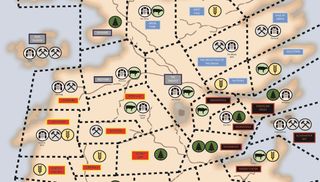 The megagame has been seeing a bit of a renaissance in the last few years, coming back into favor alongside the general return of tabletop gaming to the mainstream and the rise in prominence of game conventions. Dating back to wargaming culture of the 1970s, megagames are defined by their scale: Rarely less than 30 players with player counts often climbing closer to 100 or more.

Roleplaying game supplement makers Defy Danger have just released a free fan-work megagame of their own: Aegon’s Conquest, a 33-player game based on one of the biggest dragon-fueled wars of George R.R. Martin’s sprawling fantasy epic A Song of Ice and Fire. It’s a game with eight teams of four players, each representing a great house of powerful nobles, and a ninth single-player team representing the Night’s Watch. It’s a complex multi-role megagame with a hard mechanical core unlike a lot of other megagame designs, but there’s still a strong emphasis on roleplaying elements—so strong, in fact, that the game suggests four additional judges or gamemasters to run it. So, 37 players, actually.

Defy Danger has been working on the game since summer of 2015. “We’ve run the game four times in full,” said designer C.S. Ross, “each with increasing levels of success, and I’ve had several smaller scale playtests for specific game elements.” Ross decided to make Aegon’s Conquest because of an experience with another megagame—the popular Watch the Skies. Ross was impressed with the game’s scale, he said, “but they were relying on ad hoc rulings and LARP style adjudications. It left me wanting, and I knew I could make my own game, in their style, that better suited the kind of game experience I prefer to play.”

The end result is Aegon’s Conquest, which is at its heart a much more mechanical, traditional experience like a board wargame. After a casual read of the rules, however, I can see that it still leaves room for a lot of roleplaying—indeed, an obvious strength of the design is that it puts players more interested in things like roleplaying or wargaming into roles that emphasize those elements over others.

Defy Danger would love to hear from those who take on the challenge of running this game—if you do, make sure to reach out to them. Aegon’s Conquest is available for free on DriveThruRPG.